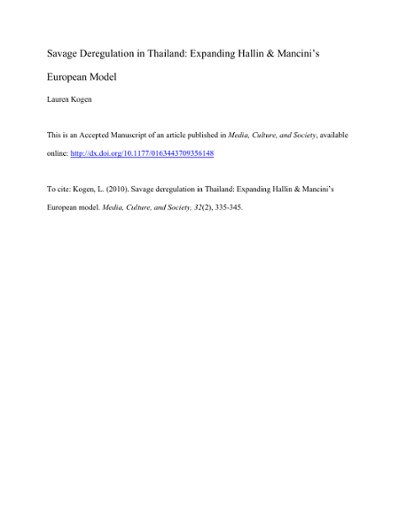 In Comparing Media Systems (2004), now a key text within global communication studies, Daniel hallin and Paolo mancini explore the evolution of media systems in Europe, and argue that the historical development of social systems in Western Europe helps explain modern-day differences in the region’s media systems. Their study divides Western Europe into three groups, roughly divided by region, and ultimately argues that the countries of Southern Europe – specifically Portugal, Spain, Greece and Italy – have the least advanced media systems with respect to public service requirements, information distribution, and diversity of voice and culture, due to socio-historical factors surrounding the development of the media sector in this region. One of the regulatory hurdles that hallin and mancini place on the path to modernization for the Southern European countries, and which will be discussed here, is a set of circumstances which allowed for a ‘savage deregulation’ of the commercial media sector, in which governments ‘introduced commercial broadcasting in an uncontrolled way, without imposing significant public-service obligations’ (2004: 124) and which led to a ‘deluge’ of commercial broadcasters. this article argues, however, that hallin and mancini’s description of savage deregulation is inaccurate and obscures the root causes of deregulation in that region. the authors’ description of the ‘deluge’ of broadcasters that occurred in Italy and Greece (their key examples of the phenomenon) equates the two histories, when savage deregulation in fact took quite distinct forms in each case, the results of which have important present-day ramifications for the cultural and human rights characteristics of the media environment in the two countries as well as, I argue, in countries with similar histories, such as Thailand.