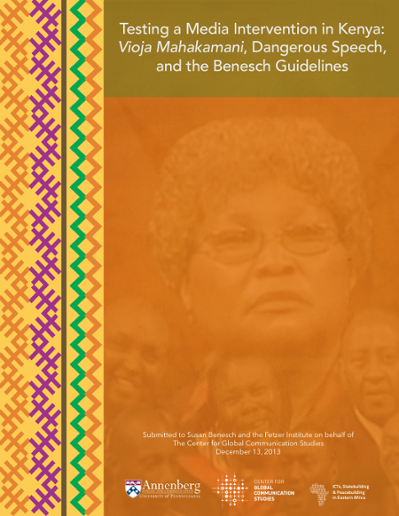 Susan Benesch, human rights scholar, genocide prevention fellow at the U.S. Holocaust Memorial Museum, and faculty associate at the Berkman Center for Internet & Society at Harvard University, has, over the last several years, developed an analytical framework for identifying ‘dangerous speech’ that catalyzes violence (Benesch, 2008; 2013). According to Benesch, “hate speech” is a vague term that encompasses many forms of speech, only some of which may catalyze violence under certain circumstances. By creating a set of guidelines “for monitoring speech and evaluating its dangerousness, i.e., the capacity to catalyze violence by one group against another,” Benesch aims to inform policies that reduce incitement to violence through speech while protecting free speech (Benesch, 2013). Among questions about these ambitious guidelines were how they could be used to make audiences more skeptical of incitement and therefore less likely to succumb to it. In the summer of 2012, Benesch teamed up with Media Focus on Africa (MFA) and the cast and crew of a Kenyan television comedy drama series, Vioja Mahakamani (referred to as Vioja throughout this report). The collaboration aimed to “inoculate” audiences against inciting speech, and make them more skeptical of it, by increasing understanding of what constitutes incitement to violence, the psychology behind incitement that helps prepare groups of people to condone or even take part in violence, and its consequences. This was accomplished through two avenues: 1) by applying her ideas through a medium that would entertain and educate the Kenyan public, and 2) by training the cast of the show so that they could become local agents of change, circulating this information outside the context of the television program. This evaluation was partially tasked with examining whether audiences did indeed become more skeptical of inciting speech. As a real-world test of skepticism (i.e., exposing audiences to inciting speech and observing behaviors) was not a feasible or desirable evaluation method, “skepticism” as a concept was investigated by breaking down the concept into its component elements – those which are likely to lead to skepticism. Namely: Did viewers better understand the origins and motivations behind inciting speech? Did viewers better understand the consequences of inciting speech? Were viewers more likely to accept personal responsibility for violent actions arising from dangerous speech? Were viewers more likely to take non-violent actions in response to future perceived injustices (using a hypothetical scenario)? Were viewers more likely to promote love and forgiveness in response to the 2007-2008 post-election violence? Through an evaluation of each of these components, we were able to draw a fuller picture of how the program influenced audiences, and how these influences might affect future behaviors. This report summarizes the findings of that evaluation, led by Dr. Lauren Kogen of the Center for Global Communication Studies at the University of Pennsylvania.

ICTs, Statebuilding, and Peacebuilding in Africa

Except where otherwise noted, this item's license is described as Attribution-NonCommercial-NoDerivs CC BY-NC-ND