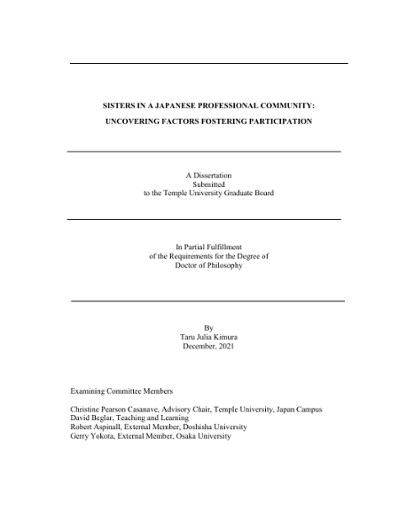 Women comprise half of the world's population but less than half of the paid workforce, less than half of organized workers, and far less than half of union leadership positions. Women benefit from union membership by enjoying a smaller gender wage gap than women without union representation. Unionized teachers enjoy higher salaries and better working conditions than those who are not union members. Despite the advantages of being in a union, women are under-represented in union membership and, more importantly, leadership positions. Considering these disparities, I conceptualized this critical study to describe and better understand how women's participation in union activities is meaningful to them. My ultimate goal was to find ways in which more union women could be encouraged to take leadership roles in the workers' rights movement. The primary purpose of this research is to identify factors that explain the dearth of women's participation in their labor union. Gender disparity in union leadership is, in part, a reflection of gender disparity in the workforce. Women make up less than half of the paid workforce but occupy the majority of the contingent workforce, which enterprise-based unions in Japan have been reluctant to organize (Weathers, 2012). Furthermore, a lack of female role models in union leadership might also contribute to gender disparity in unions' leaderships. From this, I suggest changes that potentially allow more women to participate and eventually lead in their unions. The theoretical justification of the methodology used in this study is to show the utility of communities of practice theory and intersectionality in this type of research. Because I examined participation, I used communities of practice as the primary theoretical framework, and because the participants were all women, intersectional feminism served as the secondary theoretical framework. Furthermore, I review conceptual research on communities of practice, women, and labor and review empirical research on labor, communities of practice, and women in the labor movement. For the methodology, I applied a qualitative critical case study approach to this investigation of a labor union in western Japan that primarily organizes foreign language teachers. This study is a collection of case studies of female non-Japanese English as a foreign language (EFL) teachers from inner circle countries. I investigated how these women participated in their labor union in western Japan and how their participation was meaningful to them. I was a participant observer, and the three core participants were all American. I am Canadian. At the time of this study, all four of us were union leaders. Data sources included interviews, a focus group discussion, artifacts, and the research journals that I kept over the years. The findings echoed aspects of communities of practice theory as well as intersectionality. Communities of practice theory highlighted the transformational nature of participating in a community. Furthermore, the importance of trust in the community was made clear. I considered the participants’ identities from the perspective of intersectionality. Considering differing emphases on these aspects of identity led me to realize that increasing solidarity between women working for workers’ rights and women working for women’s rights might lead to the growth of both movements. I drew the main conclusion from considering differing emphases on aspects of research participants’ identities. As has been well documented in research literature, women in the workers’ rights movement and women in the women’s rights movement place an emphasis on different aspects of their identities (Dye, 1975; hooks, 2012; Milkman, 2016). Therefore, what is lacking is a sense of solidarity, the fundamental principle of the workers’ rights movement, between these two groups of women. The original contribution to knowledge of this dissertation is an enhanced understanding of how both the workers’ rights movement and the women’s rights movement are held back by this lack of solidarity among women.