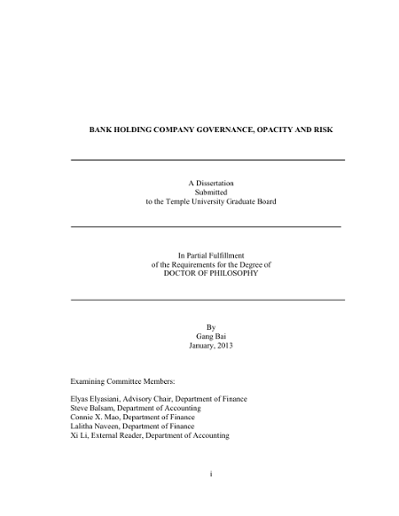 As financial intermediaries, banks are "special" because they play an important role in transferring funds from surplus spending units to deficit spending units and serve as a channel of monetary policy. Therefore, the safety and soundness of banks is essential to the financial stability and economic development. This study investigates how bank governance mechanisms, namely, executive compensation and board of directors, affect bank safety. Given the unique nature that bank assets are opaque, bank governance is expected to be different from corporate governance of industrial firms. This study also investigates how the opaqueness nature of bank assets affects the compensation design of bank executives. Chapter 1 investigates the association between asset opacity and CEO pay-performance sensitivity of bank holding companies (BHCs). Contrary to the monitoring cost hypothesis according to which when information asymmetry is high firms rely more heavily on equity-based compensation, I find that when the share of opaque assets in total assets increases, pay-performance sensitivity in BHCs declines. This finding supports the view that when the share of opaque assets increases, managers can pursue risky projects to a greater extent in the interests of shareholders but at the expenses of bondholders, and, hence, the optimal compensation structure in BHCs with larger share of opaque assets has a lower pay-performance sensitivity to restrain managerial risk-taking incentives, reducing the conflicts of interests between shareholders and bondholders. The negative effect of asset opacity on pay-performance sensitivity is robust after accounting for the endogeneity of asset opacity and using various compensation measures. In addition, I find that higher pay-performance sensitivity generally leads to a greater share of opaque assets in total assets. The results of this study suggest that asset opacity is an important determinant of compensation structure in the banking industry. BHCs should use caution when using stocks and options to promote prudent risk taking under bank asset opacity conditions because opaque bank assets make risk-shifting behaviors induced by equity-based compensation difficult to monitor, threatening the bank stability. Regulators should also account for this opacity effect. Chapter 2 investigates the relationship between insolvency risk and executive compensation for BHCs over the 1992-2008 period. I employ CEO compensation sensitivity to risk (vega) and pay-share inequality between the CEO and other executives as measures of compensation and employ a simultaneous equation model to account for the endogeneity problem between vega and risk. Five main results are obtained. First, CEO compensations in BHCs have risen in response to deregulation to resemble those of the industrial firms. Second, higher vegas lead to greater bank instability. Third, the association between bank stability and managerial compensation is bi-directional; higher vegas induce greater risk and vice versa. Fourth, BHCs in the next to the largest-size group increase CEO vegas the most and have the strongest potential to create instability in the financial industry, such as the one witnessed in 2007-2009. Fifth, increased pay-share inequality has effects opposite to those of the increase in vega; greater pay-share inequality is associated with greater bank stability. Implications of executive compensation effects on instability for depositors, deposit insurers and regulators are drawn. Chapter 3 investigates the association between the structure of board of directors and risk taking of bank holding companies. I use the number of directors on the risk committee and the frequency of its meetings to measure the strength of risk management exercised by bank boards. Several interesting findings are obtained. First, banks with stronger risk committees, namely risk committees with a greater number of directors and more frequent meetings, are associated with more diversified loan portfolios, greater amounts of safer loans, less mortgage-backed securities, and lower market risk. These results continue to hold even after controlling for the possible endogeneity problem using the dynamic panel GMM estimator. Overall, these results suggest that stronger risk management by bank boards has a positive and significant impact on banks' safety and soundness. Second, the percentage of banks having a risk committee has been increasing steadily since 1999, suggesting bank boards have gradually taken a greater role in risk management and their fiduciary duties have expanded beyond shareholders to include depositors. However, less than half of bank boards have a risk committee before 2007, suggesting weak risk management at the top level and the possibility that bank boards may have failed to control the excessive risk-taking in the banking industry leading to the recent financial crisis. Finally, the percentage of banks with a risk committee is still less than 60% after the crisis, suggesting that depositors and bank supervisors could enhance the stability of banks by further improving the effectiveness of internal risk control at bank boards.