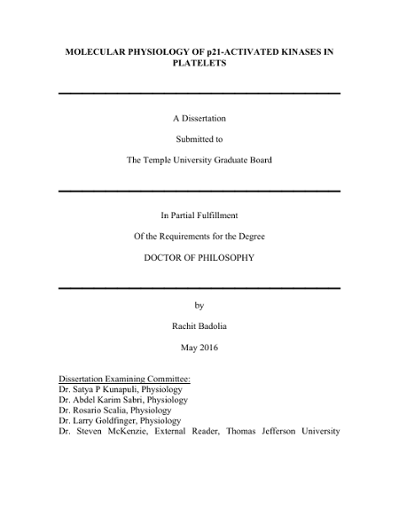 Platelets are involved in many processes ranging from fighting microbial infections and triggering inflammation to promoting tumor angiogenesis and metastasis. Nevertheless, the primary physiological function of platelets is to act as essential mediators in maintaining homeostasis of the circulatory system by forming hemostatic thrombi that prevent blood loss and maintain vascular integrity. The p21-activated kinases (PAKs) are a family of serine/threonine kinases known to be the downstream effectors of GTPases, Cdc42 and Rac1. PAKs are the key regulators of actin polymerization and have been shown to play an important role in platelet spreading and aggregation in thrombin-stimulated platelets. Whereas several signaling cascades downstream of heterotrimeric G proteins that regulate platelet functions have been characterized, little attention is paid towards the signaling cascades that involve small G proteins effectors such as PAK. A few studies have characterized the role of PAK, downstream of the Rho family of small G proteins, in outside-in signaling, but its role in the regulation of platelet functional responses by inside-out signaling events have not been elucidated. PAK is reported to interact with numerous proteins including Akt, PDK1 and PI3-kinase in different cell lines. PAK’s function as a scaffolding protein expands the role of this protein in cellular functions. Although PAK is known to have non-catalytic scaffolding functions and is shown to associate and translocate Akt in other cell systems, the catalytic and possible non-catalytic scaffolding role in platelet functions are not clearly defined. In this dissertation we propose to elucidate the scaffolding function of PAK and also its role platelet functional responses using molecular genetics approach. Akt is an important signaling molecule regulating platelet aggregation. Akt is phosphorylated upon translocation to the membrane through Gi signaling pathways by a PIP3-dependent mechanism. However, Akt is more robustly phosphorylated by thrombin compared to ADP in platelets. In this study, we investigated the mechanisms of Akt translocation as a possible explanation for this difference. Stimulation of washed human platelets with protease-activated receptor (PAR) agonists caused rapid translocation of Akt to the membrane, whereas Akt phosphorylation occurred later. The translocation of Akt was abolished in the presence of a Gq-selective inhibitor or in Gq-deficient murine platelets, indicating that Akt translocation is regulated downstream of Gq signaling pathways. Interestingly, PI3-kinase inhibitors or P2Y12 antagonist abolished Akt phosphorylation without affecting Akt translocation to the membrane, suggesting that Akt translocation occurs through a PI3-kinase/PIP3/ Gi-independent mechanism. An Akt scaffolding protein, PAK, translocates to the membrane upon stimulation with PAR agonists in a Gq-dependent manner with the kinetics of translocation similar to that of Akt. Co-immunoprecipitation studies showed constitutive association of PAK and Akt, suggesting a role of PAK in Akt translocation. These results show for the first time an important role of the Gq signaling pathway in mediating Akt translocation to the membrane in a novel Gi/PI3-kinase/PIP3-independent mechanism. PAK contains an autoinhibitory domain that suppresses the catalytic activity of its kinase domain. This autoregulatory domain found within PAK kinase provides a unique target for chemical inhibitors. IPA3, a small molecule allosteric inhibitor of PAK activation, binds covalently to the PAK regulatory domain and prevents binding to its upstream activators. IPA3 has been used in various cells, including platelets, to evaluate the role of PAK in signaling. Herein, we investigated the specificity and selectivity of IPA3 as a PAK inhibitor in the human platelets. Stimulation of platelets pretreated with IPA3 using a PAR-4 or GPV1 agonist resulted in a concentration dependent inhibition of aggregation, as was suggested by earlier studies. Interestingly, we found that incubation of washed human platelets with IPA3 leads to a non-specific increase in phosphorylation of several proteins in absence of any agonist. However, this phosphorylation is not sufficient for aggregation of platelets by IPA3. In summary, we demonstrate that IPA3 by itself can phosphorylate several proteins in human platelets and thus its use is not an appropriate strategy for investigating PAK function in platelets. PAKs are classified into two groups based on their structural differences. Human platelets have been shown to express both group I (PAK1, PAK2, and PAK3) and group II PAKs (PAK4). Previous studies showing the role of PAK were performed with nonspecific inhibitors of PAK, such as IPA3, that do not distinguish isoforms. Thus, we propose to evaluate the function of specific PAK isoforms in platelets using knockout murine platelets, which are more selective tools to study the role of individual isoforms of PAK. We observed that Pak2 null mice showed enhanced secretion responses upon stimulation with 2MeS ADP and collagen, and delayed clot retraction. Interestingly, Pak1 null murine platelets did not have any functional defects, suggesting redundancy with other PAK isoforms. The studies proposed in my thesis will provide further insights into the molecular mechanisms of platelet activation and hence provide a basis for development of PAK as novel antithrombotic therapeutic targets. Furthermore, PAK inhibitors are currently being developed by pharmaceutical companies to treat malignancies, although this enzyme is ubiquitously expressed in the body. A thorough understanding of the role of PAK in platelets can predict the effect of these drugs on hemostatic functions, which helps during clinical trials. In the future, targeted inhibition of signaling molecules in platelets could be developed and that would solely target platelet signaling pathways.