CHARACTERIZATION OF THERMOSENSITIVE HYBRID ARCHAEOSOMES AND DPA-CY3[22,22]/POPC LIPOSOMES AND IN VITRO EVALUATION OF THEIR POTENTIAL USEFULNESS IN TARGETED DELIVERY AND CONTROLLED RELEASE 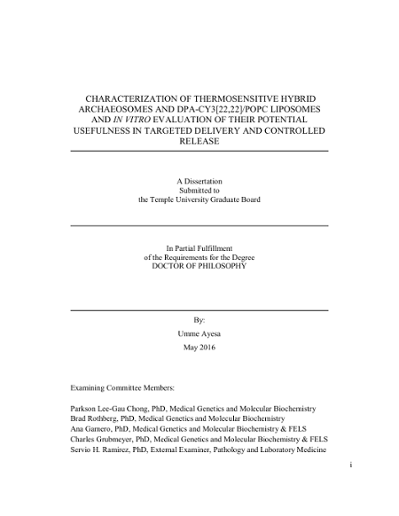 One of earlier challenges in treating cancer was utilizing drugs that are powerful yet do not cause severe toxicity to patients. Although the use of liposomal drugs has somewhat met that challenge, our objective now is to create liposomal drugs with an even better drug efficacy and further reduced toxicity. Doxorubicin hydrochloride (DXO), for example, is an anticancer drug used to treat many types of cancers, but it is toxic to the gastrointestinal tract and the heart. Encapsulating DXO into liposomes as done in the first FDA-approved liposomal DXO, Doxil, minimizes toxicity and improves the half-life, allowing more opportunities for the drug to reach the tumor. While liposomal DXO is in the market with an annual sale of approximately 450 million dollars, the addition of cholesterol and lipids with polyethylene glycol (PEG) in the formulation increase liposome stability and circulation time, but can give rise to other concerns such as potential harm to the patient and reduction in drug loading/release. In addition, in hopes of increasing drug accumulation at the diseased tissue, the use of active or targeted nanoparticles has been explored for selective drug delivery. However, despite ongoing efforts to design and test targeted nanocarriers for drug delivery, there is no known targeted liposome commercially available at this time. This illustrates that there is still room to improve the formulation of the liposomal carriers in the areas of stability, specificity to the cancer sites, and maximum drug at diseased sites. The main focus of our research is to develop novel liposomal carriers that have a higher therapeutic index and lower cytotoxicity than currently used liposomal drugs. In this research, we were able to construct two stable liposomal systems. First, we constructed a liposomal system having the ability to specifically target phosphatidylserine (PS) exposed tissues. This liposomal system contains 1-palmitoyl-2-oleoyl-sn-glycero-3-phosphocholine (POPC) and hydrophobic PS-targeting molecule bis-dipicolylamine-Zn-Cy3[C22,22] (abbreviated DPA-Cy3[22,22]). We have tested stability and PS binding ability of DPA-Cy3[22,22]/POPC liposomal carriers using light scattering and ion-exchange chromatography, respectively. In addition, with confocal microscopy and flow cytometry, we have tested DPA-Cy3[22,22]/POPC liposomes’ affinity to cancer cells. Furthermore, cell viability assay was used to determine the cytotoxic effect of DPA-Cy3[22,22]/POPC liposomes on cancer cells and non-cancer cells. In short, we found that DPA-Cy3[22,22]/POPC liposomes were stable, displayed binding to PS-exposed cells, and were taken up by PS-exposed cells inducing considerable cytoxicity. Second, we have developed and characterized the physical properties of thermosensitive liposomes made of archaeal bipolar tetraether lipids (BTL) and “conventional” monopolar diester lipids. These liposomes are also termed hybrid archaeosomes. Specifically, we used the polar lipid fraction E (PLFE) isolated from the thermoacidophilic archaeon Sulfolobus acidocaldarius as the BTL component of the hybrid archaeosomes. Dynamic light scattering and zeta potential measurements showed that the presence of PLFE greatly stabilizes liposomes. The most striking result is that at 25-30 mol% PLFE in DPPC liposomes, there is a dramatic change in zeta potential with temperature. The most abrupt change was detected in 30 mol% PLFE in DPPC, where the zeta potential changes from ~45mV at 37˚C to ~5mV at 42˚C. This drastic change in liposome zeta potential by temperature is unprecedented and could be used to develop new thermosensitive liposomes. This dramatic change in zeta potential is likely to result from gross changes in membrane structure by temperature at particular PLFE mole fractions. To further characterize PLFE/DPPC hybrid archaeosomes, we have used steady state nano-second fluorometry. The fluorescent data show that from 37˚C to 43˚C, the probe diphenylhexatrine (DPH) in the PLFE/DPPC mixtures experience a decrease in order parameter and an increase in rotational motion. With entrapped DXO we found that below 37˚C, the drug release from hybrid archaeosomes is slow. However, when the temperature was raised to above 39˚C, the initial drug release rate constant was increased by a factor of 2. Taken together, the findings suggest that a mild temperature jump changes the membrane packing and dynamics of the PLFE/DPPC mixture, making the membrane more permeable for small molecules. Additionally, confocal fluorescence microscopy showed that these hybrid archaeosomes can be taken up by live cells (e.g., MCF-7 breast cancer cells) and deliver entrapped drug molecules to the cell’s nucleus, with a rate significantly lower than that obtained from conventional diester liposomes. Our results indicate that both of these two novel liposomal systems have great potential to be used for delivery of therapeutic agents such as small drug molecules (e.g., DXO), siRNA, DNA, or peptides/proteins for cancer treatment and various other purposes. Unlike currently available liposomal drugs, DPA-Cy3[22,22] containing liposomes could be useful for targeting PS-exposed diseased tissues. 30 mol% PLFE/DPPC archeosomes are a unique thermosensitive liposome system with extraordinary stability at the body temperature and able to release entrapped drugs molecules when the local temperature of the diseased tissue is subject to hyperthermic treatment.