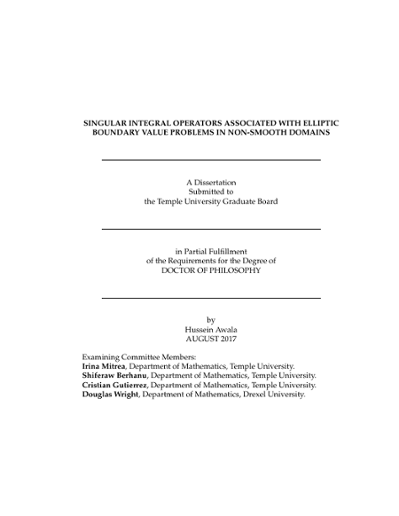 Many boundary value problems of mathematical physics are modelled by elliptic differential operators L in a given domain Ω . An effective method for treating such problems is the method of layer potentials, whose essence resides in reducing matters to solving a boundary integral equation. This, in turn, requires inverting a singular integral operator, naturally associated with L and Ω, on appropriate function spaces on ƌΩ. When the operator L is of second order and the domain Ω is Lipschitz (i.e., Ω is locally the upper-graph of a Lipschitz function) the fundamental work of B. Dahlberg, C. Kenig, D. Jerison, E. Fabes, N. Rivière, G. Verchota, R. Brown, and many others, has opened the door for the development of a far-reaching theory in this setting, even though several very difficult questions still remain unanswered. In this dissertation, the goal is to solve a number of open questions regarding spectral properties of singular integral operators associated with second and higher-order elliptic boundary value problems in non-smooth domains. Among other spectral results, we establish symmetry properties of harmonic classical double layer potentials associated with the Laplacian in the class of Lipschitz domains in R2. An array of useful tools and techniques from Harmonic Analysis, Partial Differential Equations play a key role in our approach, and these are discussed as preliminary material in the thesis: --Mellin Transforms and Fourier Analysis; --Calderón-Zygmund Theory in Uniformly Rectifiable Domains; -- Boundary Integral Methods. Chapter four deals with proving invertibility properties of singular integral operators naturally associated with the mixed (Zaremba) problem for the Laplacian and the Lamé system in infinite sectors in two dimensions, when considering their action on the Lebesgue scale of p integrable functions, for 1 &lt; p &lt; ∞. Concretely, we consider the case in which a Dirichlet boundary condition is imposed on one ray of the sector, and a Neumann boundary condition is imposed on the other ray. In this geometric context, using Mellin transform techniques, we identify the set of critical integrability indexes p for which the invertibility of these operators fails. Furthermore, for the case of the Laplacian we establish an explicit characterization of the Lp spectrum of these operators for each p є (1,∞), as well as well-posedness results for the mixed problem. In chapter five, we study spectral properties of layer potentials associated with the biharmonic equation in infinite quadrants in two dimensions. A number of difficulties have to be dealt with, the most significant being the more complex nature of the singular integrals arising in this 4-th order setting (manifesting itself on the Mellin side by integral kernels exhibiting Mellin symbols involving hyper-geometric functions). Finally, chapter six, deals with spectral issues in Lipschitz domains in two dimensions. Here we are able to prove the symmetry of the spectra of the double layer potentials associated with the Laplacian. This is in essence a two-dimensional phenomenon, as known examples show the failure of symmetry in higher dimensions.