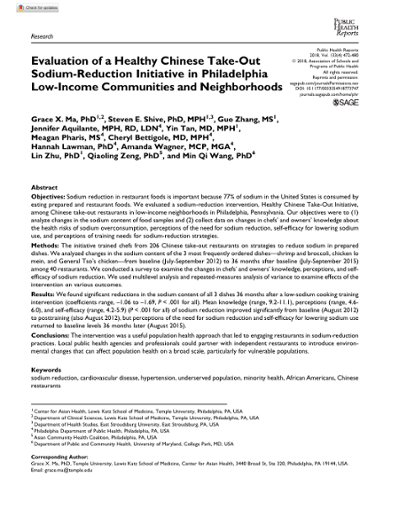 Objectives: Sodium reduction in restaurant foods is important because 77% of sodium in the United States is consumed by eating prepared and restaurant foods. We evaluated a sodium-reduction intervention, Healthy Chinese Take-Out Initiative, among Chinese take-out restaurants in low-income neighborhoods in Philadelphia, Pennsylvania. Our objectives were to (1) analyze changes in the sodium content of food samples and (2) collect data on changes in chefs’ and owners’ knowledge about the health risks of sodium overconsumption, perceptions of the need for sodium reduction, self-efficacy for lowering sodium use, and perceptions of training needs for sodium-reduction strategies. Methods: The initiative trained chefs from 206 Chinese take-out restaurants on strategies to reduce sodium in prepared dishes. We analyzed changes in the sodium content of the 3 most frequently ordered dishes—shrimp and broccoli, chicken lo mein, and General Tso’s chicken—from baseline (July-September 2012) to 36 months after baseline (July-September 2015) among 40 restaurants. We conducted a survey to examine the changes in chefs’ and owners’ knowledge, perceptions, and self-efficacy of sodium reduction. We used multilevel analysis and repeated-measures analysis of variance to examine effects of the intervention on various outcomes. Results: We found significant reductions in the sodium content of all 3 dishes 36 months after a low-sodium cooking training intervention (coefficients range, –1.06 to –1.69, P < .001 for all). Mean knowledge (range, 9.2-11.1), perceptions (range, 4.6-6.0), and self-efficacy (range, 4.2-5.9) (P < .001 for all) of sodium reduction improved significantly from baseline (August 2012) to posttraining (also August 2012), but perceptions of the need for sodium reduction and self-efficacy for lowering sodium use returned to baseline levels 36 months later (August 2015). Conclusions: The intervention was a useful population health approach that led to engaging restaurants in sodium-reduction practices. Local public health agencies and professionals could partner with independent restaurants to introduce environmental changes that can affect population health on a broad scale, particularly for vulnerable populations.