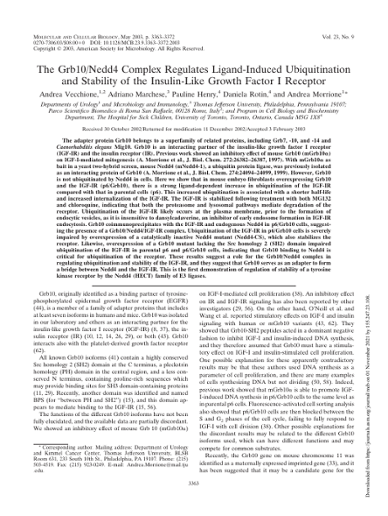 The adapter protein Grb10 belongs to a superfamily of related proteins, including Grb7, -10, and -14 and Caenorhabditis elegans Mig10. Grb10 is an interacting partner of the insulin-like growth factor I receptor (IGF-IR) and the insulin receptor (IR). Previous work showed an inhibitory effect of mouse Grb10 (mGrb10α) on IGF-I-mediated mitogenesis (A. Morrione et al., J. Biol. Chem. 272:26382-26387, 1997). With mGrb10α as bait in a yeast two-hybrid screen, mouse Nedd4 (mNedd4-1), a ubiquitin protein ligase, was previously isolated as an interacting protein of Grb10 (A. Morrione et al., J. Biol. Chem. 274:24094-24099, 1999). However, Grb10 is not ubiquitinated by Nedd4 in cells. Here we show that in mouse embryo fibroblasts overexpressing Grb10 and the IGF-IR (p6/Grb10), there is a strong ligand-dependent increase in ubiquitination of the IGF-IR compared with that in parental cells (p6). This increased ubiquitination is associated with a shorter half-life and increased internalization of the IGF-IR. The IGF-IR is stabilized following treatment with both MG132 and chloroquine, indicating that both the proteasome and lysosomal pathways mediate degradation of the receptor. Ubiquitination of the IGF-IR likely occurs at the plasma membrane, prior to the formation of endocytic vesicles, as it is insensitive to dansylcadaverine, an inhibitor of early endosome formation in IGF-IR endocytosis. Grb10 coimmunoprecipitates with the IGF-IR and endogenous Nedd4 in p6/Grb10 cells, suggesting the presence of a Grb10/Nedd4/IGF-IR complex. Ubiquitination of the IGF-IR in p6/Grb10 cells is severely impaired by overexpression of a catalytically inactive Nedd4 mutant (Nedd4-CS), which also stabilizes the receptor. Likewise, overexpression of a Grb10 mutant lacking the Src homology 2 (SH2) domain impaired ubiquitination of the IGF-IR in parental p6 and p6/Grb10 cells, indicating that Grb10 binding to Nedd4 is critical for ubiquitination of the receptor. These results suggest a role for the Grb10/Nedd4 complex in regulating ubiquitination and stability of the IGF-IR, and they suggest that Grb10 serves as an adapter to form a bridge between Nedd4 and the IGF-IR. This is the first demonstration of regulation of stability of a tyrosine kinase receptor by the Nedd4 (HECT) family of E3 ligases.