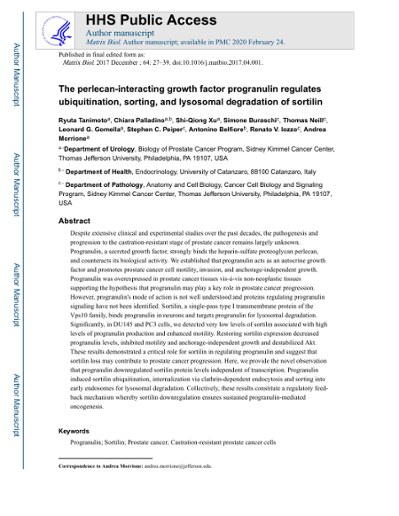 Despite extensive clinical and experimental studies over the past decades, the pathogenesis and progression to the castration-resistant stage of prostate cancer remains largely unknown. Progranulin, a secreted growth factor, strongly binds the heparin-sulfate proteoglycan perlecan, and counteracts its biological activity. We established that progranulin acts as an autocrine growth factor and promotes prostate cancer cell motility, invasion, and anchorage-independent growth. Progranulin was overexpressed in prostate cancer tissues vis-á-vis non-neoplastic tissues supporting the hypothesis that progranulin may play a key role in prostate cancer progression. However, progranulin's mode of action is not well understood and proteins regulating progranulin signaling have not been identified. Sortilin, a single-pass type I transmembrane protein of the Vps10 family, binds progranulin in neurons and targets progranulin for lysosomal degradation. Significantly, in DU145 and PC3 cells, we detected very low levels of sortilin associated with high levels of progranulin production and enhanced motility. Restoring sortilin expression decreased progranulin levels, inhibited motility and anchorage-independent growth and destabilized Akt. These results demonstrated a critical role for sortilin in regulating progranulin and suggest that sortilin loss may contribute to prostate cancer progression. Here, we provide the novel observation that progranulin downregulated sortilin protein levels independent of transcription. Progranulin induced sortilin ubiquitination, internalization via clathrin dependent endocytosis and sorting into early endosomes for lysosomal degradation. Collectively, these results constitute a regulatory feedback mechanism whereby sortilin downregulation ensures sustained progranulin-mediated oncogenesis.

Elsevier
© 2017. This manuscript version is made available under the CC-BY-NC-ND 4.0 license https://creativecommons.org/licenses/by-nc-nd/4.0/

Except where otherwise noted, this item's license is described as Attribution-NonCommercial-NoDerivs CC BY-NC-ND