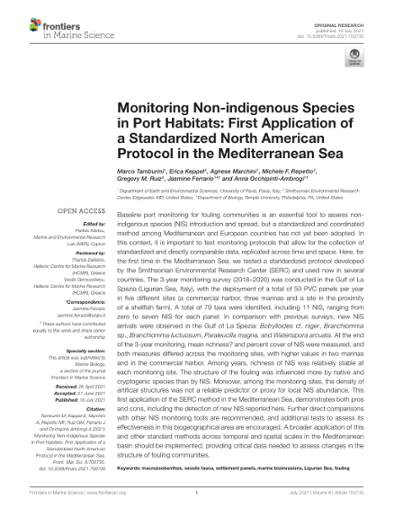 Baseline port monitoring for fouling communities is an essential tool to assess non-indigenous species (NIS) introduction and spread, but a standardized and coordinated method among Mediterranean and European countries has not yet been adopted. In this context, it is important to test monitoring protocols that allow for the collection of standardized and directly comparable data, replicated across time and space. Here, for the first time in the Mediterranean Sea, we tested a standardized protocol developed by the Smithsonian Environmental Research Center (SERC) and used now in several countries. The 3-year monitoring survey (2018–2020) was conducted in the Gulf of La Spezia (Ligurian Sea, Italy), with the deployment of a total of 50 PVC panels per year in five different sites (a commercial harbor, three marinas and a site in the proximity of a shellfish farm). A total of 79 taxa were identified, including 11 NIS, ranging from zero to seven NIS for each panel. In comparison with previous surveys, new NIS arrivals were observed in the Gulf of La Spezia: Botrylloides cf. niger, Branchiomma sp., Branchiomma luctuosum, Paraleucilla magna, and Watersipora arcuata. At the end of the 3-year monitoring, mean richness? and percent cover of NIS were measured, and both measures differed across the monitoring sites, with higher values in two marinas and in the commercial harbor. Among years, richness of NIS was relatively stable at each monitoring site. The structure of the fouling was influenced more by native and cryptogenic species than by NIS. Moreover, among the monitoring sites, the density of artificial structures was not a reliable predictor or proxy for local NIS abundance. This first application of the SERC method in the Mediterranean Sea, demonstrates both pros and cons, including the detection of new NIS reported here. Further direct comparisons with other NIS monitoring tools are recommended, and additional tests to assess its effectiveness in this biogeographical area are encouraged. A broader application of this and other standard methods across temporal and spatial scales in the Mediterranean basin should be implemented, providing critical data needed to assess changes in the structure of fouling communities.