EXAMINING THE NEUROBIOLOGY OF NON-SUICIDAL SELF-INJURY IN CHILDREN AND ADOLESCENTS: THE ROLE OF REWARD RESPONSIVITY 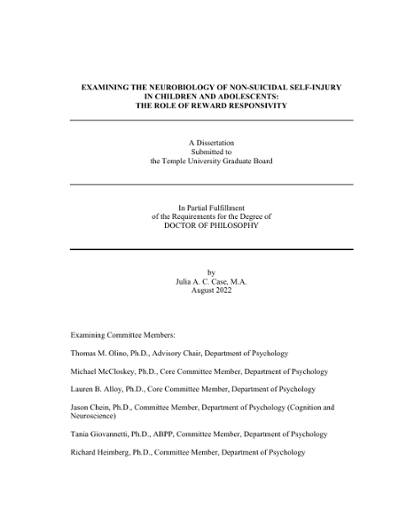 Non-suicidal self-injury (NSSI), defined as the deliberate damaging or destruction of body tissue without intent to die, are common behaviors amongst youth. Although prior work has shown heightened response to negative outcomes and dampened response to positive outcomes across multiple methods, including behavioral and physiological measures, little is known about the neural processes involved in NSSI. This study examined associations between NSSI engagement and responsivity to rewards and losses in youth with and without a lifetime engagement in NSSI. We employed a task-based functional magnetic resonance imaging (fMRI) study to examine differences between regions of interest (ROIs; ventral and dorsal striatum [VS, DS], anterior cingulate cortex [ACC], orbitofrontal cortex [OFC], ventrolateral and ventromedial prefrontal cortex [vlPFC; vmPFC], and insula) and whole-brain connectivity (utilizing bilateral DS, mPFC, and insula seed ROIs) in youth with and without NSSI. We used two reward tasks, in order to examine differences between groups across domains of reward (i.e., monetary and social). Additionally, we examined the specificity of the associations by controlling for dimensional levels of related psychopathology (i.e., aggression and depression). Results from the current study found that NSSI was associated with decreased activation following monetary gains in all ROIs. Further, these differences remained significant when controlling for comorbid psychopathology, including symptoms of aggression and depression. Finally, exploratory connectivity analyses found that NSSI was associated with differential connectivity between regions including the DS, vmPFC, insula, parietal operculum cortex, supramarginal gyrus, cerebellum, and central opercular cortex. Weakened connectivity between these regions could suggest deficits in inhibitory control of emotions in individuals with NSSI, as well as dysfunction in pain processing in individuals with NSSI, whereby these individuals experience pain as more salient or rewarding than individuals without NSSI. Although results did not support our hypotheses, findings suggest disrupted reward processes in youth with NSSI, contributing to our understanding of the role that reward processes may play in NSSI, in the engagement and reinforcement of these behaviors. We also conducted an extensive systematic review of the studies indexing neural structure and function in NSSI, summarizing the literature on the neurobiological correlates of several psychological processes implicated in NSSI engagement, including emotion processes, pain processes, executive processes, social processes, and reward processes. Results of the review highlighted the neural regions most consistently associated with NSSI, including the amygdala, insula, frontal, prefrontal, and orbitofrontal cortices, and the anterior cingulate, dorsal striatum, and ventral striatum. Additionally, data showed that NSSI is associated with greater emotional responses in negative situations, poorer down-regulation of negative emotions, and poorer inhibitory control over impulsive behaviors. Overall, findings suggest that NSSI is associated with maladaptive coping, and that this down-regulation of negative emotion resulting from NSSI may be experienced as rewarding and may serve to reinforce engagement in these behaviors. Finally, this review highlighted the importance of standardizing the methods of indexing neural structure and function in NSSI, specifically in terms of how NSSI is categorized, which comorbid disorders are examined, and how neuroimaging data are collected and analyzed, so that research in this area is comparable and reproducible.