“I JUST WANNA GIVE MYSELF A CHANCE”: A QUALITATIVELY-INFORMED SIMULATION MODEL OF DISENGAGEMENT FROM STREET PROSTITUTION 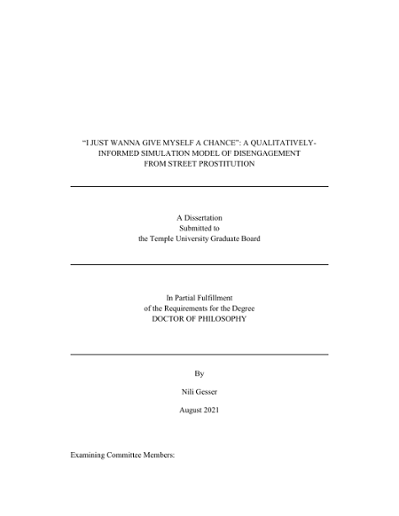 Women engaged in street prostitution are among the most vulnerable populations, due to the conditions they work in, their often disadvantaged backgrounds, and their limited choices and agency. In order to surmount the multiple barriers that they encounter when trying to exit prostitution, both at the structural and the individual level, women need holistic support that addresses their diverse needs (Hester & Westmarland, 2004). Extant theoretical frameworks of exiting prostitution failed to incorporate this important element of support into the exiting process. Some of these frameworks are based on mixed samples of women in indoor and street prostitution, despite their different situations and needs. Furthermore, while researchers generally agree on the need for wrap-around holistic support of a range of services, it has not been sufficiently explored, neither in depth nor systematically. Questions remain as to what support looks like, what is its influence, and what is the best timing for offering support to women exiting street prostitution. This study set out to better understand the patterns of exiting street prostitution, to explore the role of support in facilitating successful and long-term disengagement from prostitution, and to determine the more effective time to offer support in the exiting process. The study employed a mixed-method design combining qualitative interviews with an Agent-Based Model (ABM), an innovative computerized simulation tool that has never been applied to street prostitution. In-depth interviews with 29 women from five recovery programs for women with substance abuse disorder who have exited prostitution were analyzed in ATLAS.ti to provide thorough responses to the research questions about support and helped refine the ABM. The ABM was designed based on the theoretical framework offered by Baker, Dalla, and Williamson (2010), enhanced by support and some additional elements incorporated into this framework. This framework conceptualizes exiting as a staged process, starting when women are immersed in prostitution, moving on to the Awareness stage, then to Deliberate Planning, then to Initial Exit and at last to the Final Exit stage. A simplified structure of the stages was applied in the ABM, whereby virtual agents representing women immersed in street prostitution made a series of decision to determine whether they eventually exited prostitution, first to the initial exit stage and later to the final exit stage. The ABM model was a computerized representation of a 10-year virtual longitudinal study, during which a support intervention was offered, first consistently to all agents and then in a second model only to agents who enter the Initial Exit stage. Two more interventions, suggested by the women’s narratives, were tested to determine the influence of spirituality on exiting and the impact of offering women more support when they were ready to exit. street prostitution. The qualitative findings of the study indicated the importance of peers over professionals as facilitators of women’s exiting journeys. Peers provided women with hope and a nonjudgmental understanding of women’s experiences in prostitution; helped alleviate guilt and shame by normalizing these experiences; and allayed women’s loneliness. Another important source of support for women was discovering their spirituality. Women often spoke of God in similar terms to their peers, as an entity that offers knowledge, love and experience. The qualitative findings informed the operationalization of several variables in the ABM and contributed a new variable, Spirituality, to the model. Another important qualitative finding was the importance of offering support at the moment women were ready to exit, which resulted in an interaction between women’s intention to exit and support in the ABM. Additional qualitative findings highlighted the importance of treating both substance abuse and prostitution to unravel the prostitution-drugs nexus in order to achieve a successful exit. Women described their relapse into drugs, which almost always preceded a return to prostitution, as a gradual internal process of a growing desire to use drugs which culminated in an opportunity to use drugs. Such a process mirrored their readiness to exit– an internal process of despair which ended with reaching out for support, or a “hook for change” (Giordano et al., 2002). However, while women were fully aware of both the moment of relapse and the moment of readiness to exit and could easily identify what had led to their relapse, the elements that led to being ready to exit remained nebulous. More research is warranted on this issue. The quantitative findings clearly demonstrated that once virtual women received support in the exiting process, more of them exited, their exit was more permanent (in other words, more of them moved from the Initial to the Final Exit stage and stayed there), and they exited earlier in the process. The more support we offered, the more these findings were pronounced. The best model fit to the data was the one including all support types– continuous support, additional support for the Initial Exit stage, spirituality, and the interaction between readiness and support. While the model without support was characterized by oscillating exiting trajectories regardless of the final outcome, offering support helped smooth the curve and prevented the back and forth movement that characterized women’s journeys in and out of prostitution, both in the quantitative and the qualitative data. This research elaborates the theoretical foundation of the process of exiting prostitution, and specifically, the impact of support, and what support means, in the exiting process. The findings of this study have important implications for service providers and policy makers in deciding on how much, when, and what type of support to offer women who are exiting street prostitution—for example, incorporating peer support in programs that assist women. The quantitative inquiry revealed the impact and benefits of offering support in the exiting process; the qualitative inquiry revealed the multidimensional nature this support. The ABM may be further applied to other exiting processes in related fields, such as recovery from substance abuse. The mixed-method design combining ABM with qualitative interviews should serve as a model to study vulnerable populations with simulation tools.