DISABILITY, DEPENDENCY, AND THE MIND: REPRESENTATIONS OF CARE-GIVING AND RECEIVING 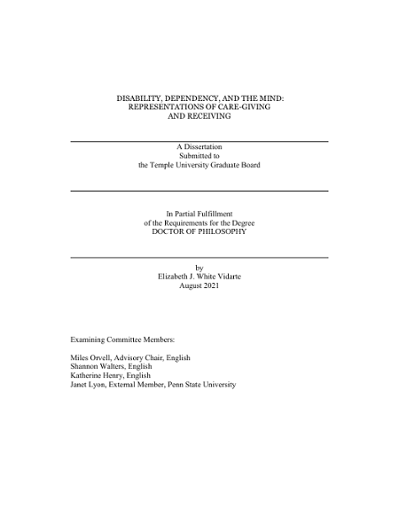 Since its beginnings in the 1970s disability activist movement, disability studiesscholarship has traditionally focused on physical disability and, in working to deconstruct the figure of the “cripple” as a symbol of pathos, has shied away from close examinations of pain, suffering, and dependency in favor of a focus on disability pride, agency, and community. As the field has grown, however, it has made room for investigations into these more difficult considerations, and in particular into how these affective states cluster around mind-related disability. Feminist philosopher Eva Kittay’s 1999 book, Love’s Labor, reexamines social contract theory in terms of what she calls the “dependency relation” and its attendant ethics of care. Bringing together mental disability with an analysis of both gender and race, Kittay’s work undergirds my own project’s intervention into readings of American literature between the Civil War and World War II, along with recent debates (for example, in the work of Licia Carlson, Nirmala Erevelles, Rachel Adams, among others) about the gendered, raced, and classed structures of care and dependency that are particularly evident in the case of mind-related disability. With a few notable recent exceptions, scholarship into the history of psychiatry has largely ignored the early and sustained imbrication of race in the origins of the American asylum movement and its widespread — and long-lasting — cultural impact. My project seeks to intervene into this history by examining the works of American writers who deploy representations of dependency and mind-related disability, and, in so doing, also critique, and sometimes reinscribe, assumptions of racial and gendered Otherness. I argue that mind-related disability produces strong cultural anxiety reflected in these writings precisely because it threatens the illusion of raced-and-gendered autonomy, an American ideal that has never been possible but has loomed large since the earliest days of the republic. Working from Ato Quayson’s insight that attention to disability, like the sublime, activates aesthetic instability in the structures of representation and an ethical core in literary interpretation, I offer textual readings that show that dependency, coded as weakness and vulnerability, was conceived as a condition categorically apart from white male-independence, coded as strength and autonomy. As such, the focus on independence as the organizing principle of a just society — rather than on distributed responsibility and nonhierarchical interdependence — easily survived the shift from antebellum sentimental protection to modernist scientific persecution. Focusing my inquiry on dependency and care, in my second chapter, “The Mad History of Asylums and Abolition,” I show how the early asylum movement and abolitionists produced and responded to oppressive rhetorics of race and madness that could be generative for resistance nonetheless. To that end, I examine the writing of asylum-movement reformer Dorothea Dix, in which we see the strained attempt to advocate for insanity as a specifically white condition that was tied to the vigor of civilization and progress. I then turn to the writing of abolitionist and social reformer Frederick Douglass, who sought to establish the capacity of black Americans to suffer mental anguish or “madness” under slavery and yet also to invert mainstream rhetoric such that madness adhered not to the abolitionist but to the slaveholding society of which he was critical. In my third chapter, “The Traumas and Delusions of the Civil War,” I reveal the mutual dependency of race and mind-related disability in representations of the Civil War and its traumas. Mind-related disability, instantiated in the individual body, becomes a potent metaphor for the social trauma of the war and the trauma of slavery, both of which are repressed in the post-Reconstruction narratives of white national fraternal healing. I focus specifically on the sentimental novella, For the Major, by Constance Fenimore Woolson, and on the genre-bending work, Specimen Days, by Walt Whitman, to show how otherwise promising models of care are profoundly compromised by their erasures of race and/or mind-related disability. In my fourth chapter, “The Medical Gothic: The Medical Gaze and Monstrous Care,” I show how after the war, the consolidation and assertion of medical authority produced a medical gaze defined by empiricism and scientific objectivity, a gaze that was critiqued by several late nineteenth-century writers by figuring the monstrous results of such medical care. I examine the doctor-patient relationship at the heart of Charlotte Perkins Gilman’s “The Yellow Wallpaper” and the ethical medical dilemma at the center of Stephen Crane’s novella, The Monster, to analyze the harmful care that produces social death under asymmetrical conditions of power. Despite these critiques of medical authority, the degeneration theories of the finde-siecle and the shift towards biological determinism engendered the rise of eugenics and an especially virulent abjection of mind-related disability. In this context, my fifth chapter, “Eugenic Time, Eugenic Death,” examines how community care could not help but fail and survival itself emerges as a kind of violence, as Charles Chesnutt’s story, “Dave’s Neckliss,” and Mary Wilkins Freeman’s story “Old Woman Magoun,” confirm. Throughout the dissertation, I show how the fantasy of American autonomy and rationality relies on racial and gendered hierarchies to sustain it, with often brutal consequences in the care of the dependent mentally ill/disabled.