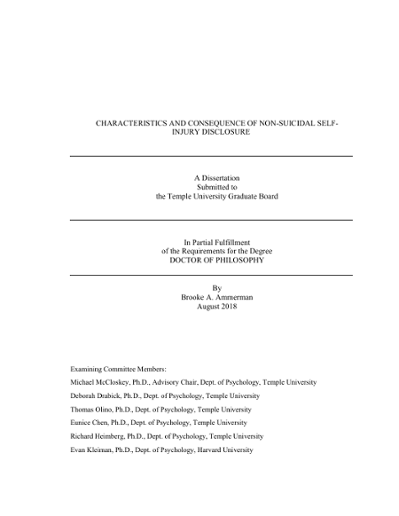 Non-suicidal self-injury (NSSI) is linked to several adverse effects (Bentley et al., 2015; Klonsky et al., 2013; Plener et al., 2015). However, only approximately half of those engaging in NSSI ever disclose their behavior (Armiento et al., 2014; Martin et al., 2010), with less than 15% reporting they disclosed to a healthcare provider (Hasking et al., 2015). Despite the critical role of disclosure in NSSI reduction and treatment, there is a dearth of research aimed at understanding those who disclose NSSI, to whom they disclose, and the outcomes of choosing to disclose. This is, in part, due to the absence of measures that assess perceived reactions of NSSI disclosure recipients. The current project examined these facets of NSSI disclosure through two related studies. Study 1 used an undergraduate sample (N=452) with a history of NSSI to (1) identify factors that may discriminate between those who do and do not disclose their NSSI behavior and (2) better understand the choice of NSSI disclosure recipient. Results indicated that individuals who disclosed their NSSI reported greater inter- and intra- personal motivations for NSSI and increased rates of suicide plans and attempts; groups did not differ on NSSI severity, emotional distress vulnerabilities (e.g., distress tolerance, perceived stress, suicidal ideation), or interpersonal obstacles (i.e., social support, stigma internalization). Among those who disclosed their NSSI (N=271), peers were the most common disclosure recipient. Study 2 validated a new measure of perceived social reactions upon disclosure of NSSI, the Self-Injury Social Reactions Questionnaire (SI-SRQ), and provided preliminary information about the associations between perceived social reactions and NSSI disclosure characteristics. A three-factor structure of the SI-SRQ assessing positive (tangible aid, emotional support) and negative social reactions was supported in both an undergraduate (N=269) and community (N=217) sample. Overall, the psychometric properties of the SI-SRQ were supported. However, findings did not demonstrate a relationship between disclosure characteristics (i.e., peer recipient choice, number of disclosures, involuntary disclosure) and positive or negative social reactions. Results from the current project highlights the importance of one's social context (i.e., facilitating conversations about mental health) on the likelihood of NSSI disclosure and the need for more explicit discussions about NSSI engagement, facilitated by both family members and healthcare providers. Furthermore, by examining a newly developed measure to assess perceived reactions to NSSI disclosure, the current project identified three main forms of social reactions an individual may receive upon disclosing their NSSI. Although preliminary, these findings may help inform educational efforts about responding to NSSI disclosures more effectively, such as by providing information about counseling or other services and more general, emotional support.