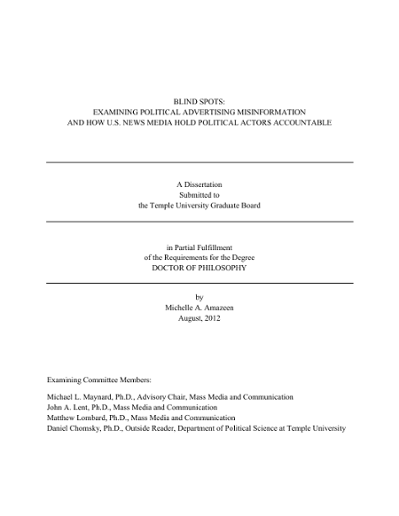 While conventional wisdom suggests political ads are often misleading, this is the first known study to quantify the prevalence of inaccuracies in political advertising. This study also examines how and explains why the U.S. news media provide coverage of political advertising in the manner that they do. A multi-method research design includes a content analysis of the television ads from the 2008 presidential election, secondary data analysis of the National Annenberg Election Survey 2008, semantic network analysis of press coverage of political television ads from the 2008 election, as well as in-depth interviews with scholars, practitioners, journalists and lawyers having expertise in the issues surrounding political advertising. Of all the English-language paid political ads that aired on television during the 2008 general election, just under 30% contained at least one inaccuracy based upon the ratings of FactCheck.org and PolitiFact.com. This figure, however, is likely a gross under representation of the prevalence of inaccuracies in political ads from 2008 because most of the ads (70%) were never evaluated by these purportedly elite fact-checkers. Among ads assessed, however, more than three out of four of the evaluated claims had some degree of inaccuracy. Furthermore, ads containing at least one inaccuracy aired twice as often on television as the ads that were never evaluated. To the degree inaccurate ads air on television more frequently, then, there is cause for concern particularly given the broadcasters' mandate to serve the public interest. Moreover, while political interest supporters were one of the groups most likely to have inaccuracies in their ads, nearly half of their spending was in the last weeks of the election contributing to most of their ads going without evaluation. Thus, in a post-Citizens United world, attempts by fact-checkers to review the onslaught of PAC ads during the final weeks of the 2012 election (and the final weeks of future elections) will be crucial in combating inaccuracies. This study also extends the work of Geer (2006) who offered an organized review of negativity in political advertising. Rather than finding support for the hypothesis that negative attack ads are more accurate than advocacy ads, the evidence challenges Geer's defense of negativity. Among the ads evaluated by the fact-checkers, inaccuracies were significantly more likely to be present in attack rather than either advocacy or contrast ads. While Geer may have demonstrated that negative ads offer more substantive evidence, simply because evidence is presented does not mean the evidence is accurate. In the more provocative ads of 2008 designed to gain attention, inaccuracies were rife. Moreover, rather than the mainstream news media fixation on political ad negativity, the evidence in the forthcoming pages suggests attention is more warranted concerning the accuracy of the claims within the ads regardless of the ad's tone. A first step toward a theory of strategic misinformation is also offered by demonstrating that it is possible to predict which political ads were more likely to draw an inaccurate rating from the fact-checkers. Holding all other variables constant, it was attack ads that had the highest odds of being evaluated as inaccurate with contrast ads also having a high likelihood. These predictions also confirmed that as the campaign progressed, the odds of an ad being rated inaccurate declined which was a function of ads not being evaluated. Furthermore, it was revealed that a loss of momentum or a decline in public perceptions of candidate characteristics increased the odds of candidates drawing inaccurate ratings in their attack ads. In extending understanding of how news media cover candidate campaigns when political advertising is referenced, a plurality of media outlets from the over two dozen in the study were characterized foremost by their focus on campaign strategy rather than fact-checking. One cluster, however, emerged as AdWatchers - those committed to using political ads to scrutinize the accuracy of what candidates and their surrogates were claiming. Nonetheless, the economic realities of adwatching are that there is a so called "chilling effect" because it is expensive, time-consuming, and divisive. Furthermore, the dearth of watchdog ad reporting enables broadcast stations to continue airing ads that may be false while preserving their ability to claim ignorance about the content when faced with regulatory compliance issues. Thus, the political ads most likely to air are the ones with inaccuracies. Chances are the ads will go unscrutinized by the mainstream news media while television stations profit from their proliferation.