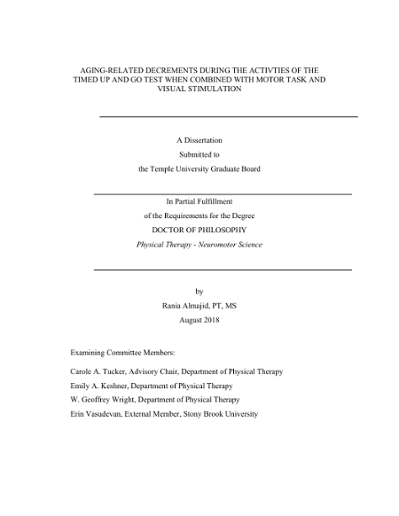 Falls in older adults are linked with increased morbidity and mortality, and remain a major public health concern. Aging is associated with increased reliance on the visual system for postural control, termed “visual dependence”. Discordance between visual, vestibular and proprioceptive sensory information can lead to balance loss and falls. In addition to increased visual dependence (VD), older adults have more difficulty than younger adults in multi-tasking, performing simultaneous tasks (e.g. walk and talk), which may further increase fall risk. A common clinical test of physical function, the Timed Up and Go (TUG), requires the individual to stand from a seated position, walk forward, turn, walk back to the seat, turn and sit back down. Previous studies have explored the effect of multi-tasking during the TUG; however, the role of visual dependence and its interaction with multi-tasking on specific movement components of the TUG has not been deeply explored in the existing literature. The primary goal of this project was to understand the effects of aging and visual dependence on physical function as measured by the TUG. The three aims that guided this work are 1) to examine how aging affects performance metrics and movement components of the TUG (e.g. sit-to-stand, walking, turning, stand-to-sit) when simultaneously performing a motor task with or without with visual stimulation; 2) to examine how visual dependence affects performance metrics and movement components of the TUG when simultaneously performing a motor task with or without visual stimulation; and 3) to determine the effect of wearing a head mounted display (HMD) on performance metrics and movement components of the TUG in older and younger adults. Twelve younger adults (6 males) and sixteen older adults (8 males) participated in this work. They were further classified as sixteen visually independent adults (VI) (9 younger adults, 7 older adults, 9 males) and 12 visually dependent adults (VD) (3 young adults, 9 older adults, 5 males). Participants completed eight conditions: The dependent variables, measured using 6 inertial measurement unit sensors, included spatiotemporal variables of the TUG (total time, sub-component movement times, gait speed, step cadence during turning); three-dimensional peak trunk velocity (PTV) (i.e. around the mediolateral, vertical, and anteroposterior axes); acceleration range and jerk of sit-to-stand and stand-to-sit; and multitask cost. Multitask cost reflects the change in the motor behavior that occurs due to high attentional demanding conditions, with the lowest multitask cost reflecting poorer motor performance. The multitask cost was calculated as the percent change of each dependent variable in relation to the single task performance (i.e. TUG with no secondary task) in the third chapter. Our results demonstrated that the wear of HMD has an impact on TUG kinematics, regardless of adding a visual stimulus, more than holding a cup of water. Providing a visual stimulus decreased the PTV in walking and acceleration range in sit-to-stand. Particularly, presenting a visual stimulus in a pitch up rotation decreased the PTV in turning and increased the peak trunk velocity in stand-to-sit when compared to standard TUG. Older adults showed a decrease in the multitask cost (i.e. poorer performance) of turn and sit-to-stand time and the PTV in turning and a lower variability in trunk velocity in turning and sit-to-stand and the acceleration jerk in sit-to-stand and stand-to-sit compared to younger adults. Older adults who were visually dependent showed a lower mean and variability in the mediolateral and vertical acceleration range of sit-to-stand than older adults who were visually independent. Our results indicate that the wear of HMD has an impact on posture that should be taken into account in clinical research. Assessing the kinematics in turning and sitting-to-standing could be of a great interest for future studies that would include older adults with functional limitations (e.g. fallers versus non-fallers). Sit-to-stand motion, in particular, can differentiate older adults who are more sensitive to visual stimulation.