Law, Literature, and the Problems of Interdisciplinarity 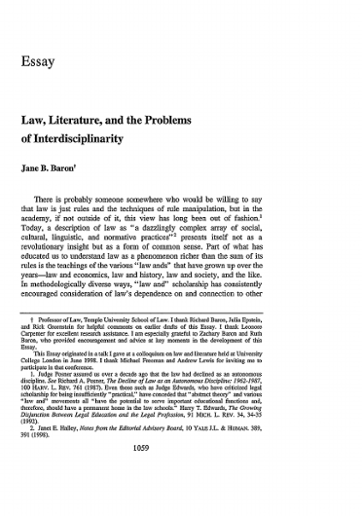 This paper argues that the law and literature movement has failed to generate the excitement it is capable of generating within the American legal academy because it has not been sufficiently interdisciplinary, or - to be more precise - it has not been very thoughtful about interdisciplinarity. At the same time, it has had less influence than it might have had with actual lawyers because it has seemed too interdisciplinary, in the sense of not having a lot to say about the aspect of law with which most lawyers are most concerned: doctrine. There is less of a paradox here than might appear. Law and literature scholarship has not questioned what the category law consists of and has thus tended inadvertently to reinforce the notion of law as autonomous. Before developing this critique in more detail, I state a separate critique, which may be a helpful backdrop. This background critique is that the law and literature movement has tended to undermine itself from within. If there is a single movement here, it is certainly a very fractured one. The concerns of its humanist, hermeneutic, and narrative strands are quite disparate. This is a movement of many methodologies and conclusions. The multiplicity of approaches and concerns that leads some to see literature as a source of nearly endless possibilities may lead skeptics to dismiss law and literature as an empty vessel, a phrase devoid of content. While the interdisciplinarity critique and the background critique are not logically connected, the critiques may not be wholly unrelated. Each strand of the law and literature movement seeks to demonstrate that literature has something to offer to law. The less attention is paid to what law is, for purposes of this comparison, the easier it is to make the case for literature; the less law already includes, for example, the more obvious it is that it requires the supplementation of literature. Assessing connections requires understanding what lies on either side of the and bridge, but this is precisely the terrain that is not being carefully mapped. Both critiques, then, point to a single problem: by treating law's boundaries as both necessary and natural, the law and literature movement seems to beg questions it is ostensibly committed to answering, such as whether it makes sense to use the outside discipline of literature as a tool to examine what is or could be inside law and, more importantly, how we define what is internal and external to law as a discipline. A more fruitful exploration of interdisciplinarity in law and literature does not require the delineation of the true and real boundaries between law and literature. It cannot, for precisely the reason that law and literature are not natural categories describing disciplines that are just there, pre-existing and pre-defined. Our understanding of the categories may be as much a product of our attempts to compare and contrast them as of any quality that they have apart from the context of those contrasts. And the interesting question is not whether any particular definition of the categories is true, but what it might tell us about our aspirations for law, and for the place of law in our culture.