Paradise Kept: A Rule-Based Approach to the Analysis of Transactions Involving Disregarded Entities 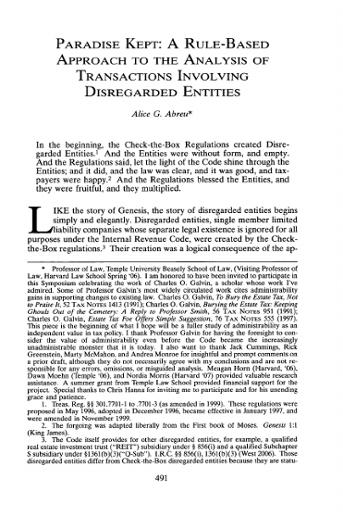 Disregarded entities, single member limited liability companies whose separate legal existence is ignored for all purposes under the Internal Revenue Code, were created by the Check-the-Box regulations. Their creation was a logical consequence of the objective of those regulations, which was to provide certainty in entity classification. Nevertheless, following the promulgation of the regulations the Service has issued letter rulings that look to substance to determine whether an LLC will be treated as having a single member and has otherwise retreated from the mandate of the regulations to disregard the separate existence of such entities. By looking to substance the Service has departed from the rule-based approach that produced the regulations and risks unraveling the structure created by the regulations. To look to substance is to apply a standard: substantively similar transactions ought to be taxed similarly. While that is often an unassailable goal, in this case, its costs are too great. When deciding whether to disregard an entity to determine the tax consequences of business transactions, the Service should abandon the goal of substantive accuracy. Substantive accuracy is unachievable in a system of elective classification, because elective classification necessarily produces a system in which substantively identical organizations are treated differently for tax purposes. Having abandoned all attempts at classifying entities by reference to substance in the Check-the-Box regulations the government should resist the temptation to reintroduce substantive analysis. Instead, the Service should focus on achieving the primary objective of the regulations: administrability. Administrability is the god that the Treasury and the Service purport to have been worshiping by issuing the Check-the-Box regulations, and administrability should therefore drive the application of those regulations. Instead of the ad hoc, sometimes-rule, sometimes-standard approach the Service is currently taking, or an always-rule, or always-standard, approach that has the beauty of consistency, this article proposes a bifurcated analysis. The proposed analysis distinguishes between situations in which the characterization of an entity is important ex-ante, where knowing whether the entity will be disregarded would allow both taxpayers and the Service to predict accurately the tax consequences of particular transactions, and situations where the characterization is relevant only ex-post, where an event that is not susceptible of planning has already occurred. In developing the proposed analysis, I draw on scholarship that examines the application of rules and standards in a variety of legal contexts. I do that because many of the insights developed in that literature apply in tax and because I want to make that literature more prominent in tax scholarship generally. The increasing difficulty of administering the tax system suggests that policymakers should think more deeply about the tradeoff between equity and administrability. Disregarded entities can help to explore that tradeoff because they are the culmination of more than half a century of struggle with entity classification and represent one resolution of it.