The Rule of Law as a Law of Standards: Interpreting the Internal Revenue Code 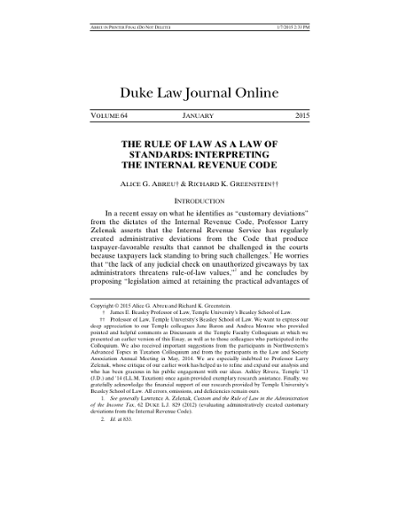 Although fields of law ordinarily comprise both rules and standards, and foundational tax scholars such as Professors Surrey, Warren, and Bittker understood the importance of standards in tax law, many tax scholars and professionals have come to regard federal tax law as “the paradigmatic system of rules.” The vision of tax-as-rules is particularly alluring because rules have been associated with rule-of-law values, and it seems that the rule of law might be especially important in the field of taxation. The rule of law constrains the coercive power of government, and perhaps few powers are viewed with as much suspicion as the taxing power. Our claim that the existence of many rules in the tax law does not dictate the interpretation of all tax formulations as rules seems to threaten critical rule-of-law values. Nevertheless, we believe with Surrey and Warren that tax, like other areas of law, can flourish only if the IRS and the courts are able to respond to “unforeseen cases as they arise” and that this flexibility demands that many Code provisions be interpreted as standards. We also believe that this use of standards does not threaten rule-of-law values. In this essay we defend both propositions. To do so we engage pointedly with Professor Larry Zelenak’s critique of the position we took in our earlier article, Defining Income, where we claimed that the category of “gross income” in the Internal Revenue Code is best understood as a standard, not a rule. In Custom and the Rule of Law in the Administration of the Income Tax, Professor Zelenak worried that our position threatened the rule of law by “stretch[ing] beyond the breaking point” the concept of interpretation. This essay, which elaborates the argument made in Defining Income, engages directly with Professor Zelenak’s critique and further develops our position that although there are both correct and incorrect interpretations, interpreting a legal formulation as a flexible standard rather than a rigid rule is not lawless. Like Professor Zelenak, we draw on examples from the world of corporate taxation, including iconic cases such as Gregory v. Helvering, as well as more recent controversial pronouncements such as Notice 2008-83, in which the IRS concluded that section 382 did not apply to banks, only to be sharply rebuked by Congress.