Listen to Peter: Embrace the TBORs 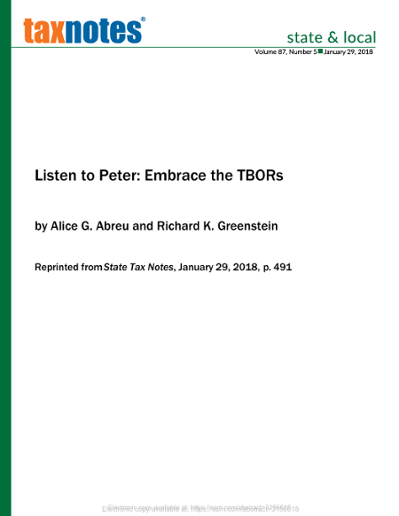 A TBOR is a Taxpayer Bill of Rights and 43 states, and the federal government all have one. Unfortunately, most practitioners either don’t know that TBORs exist, or, if they do, they think TBORs are of little, if any, practical importance—toothless tonics designed to make taxpayers feel better about the unpleasantness of paying taxes but offering no enforceable rights. Nevertheless, as no less an authority than Peter Faber urged in an “In the Trenches” article published in State Tax Notes on September 4, 2017, for tax advisors to ignore the “more general taxpayer protection rules of the sort that are embodied in bill of rights legislation . . . [is] a mistake. There are times when these rules may be helpful in controversy situations.” We think that not only is Peter correct, but that TBORs can do even more. TBORs can transform both tax practice and the relationship between taxpayers and taxing authorities, and their provisions can be enforced by courts even in the absence of legislative language providing for such enforcement. There are at least three arguments in support of that proposition, and we developed them in a Special Report we wrote on the Federal TBOR, and recently published in Tax Notes: Embracing the TBOR. We think each of those arguments could also be made with respect to state TBORs. As we explain in that Article, the first argument is that construing the codification of the TBOR as a meaningless gesture ignores the well-established canon of statutory construction against surplusage. The second is that the TBOR significantly enhances the taxpayer’s normative basis for demanding legal remedies for violations of taxpayer rights because it invokes procedural justice, using the language of rights where only government duties existed before. And the third is that the TBOR may have actually created taxpayer rights. Our Article on the Federal TBOR does not argue that all taxpayer rights should be enforced either all the time or to the same extent, as that could be disruptive or even catastrophic for tax administration and may not be necessary to fulfill the objectives of the TBOR. But it does maintain that the adoption and particularly the codification of the TBOR can transform the legal environment so that demands for enforcement can be weighed by the courts on a case by case basis, in light of all the facts and circumstances, which include the identity and attributes of the taxpayer. Language in many of the state TBORs to the effect that failure to comply with the provisions of the TBOR will not invalidate particular government actions should not preclude redress that takes other forms.