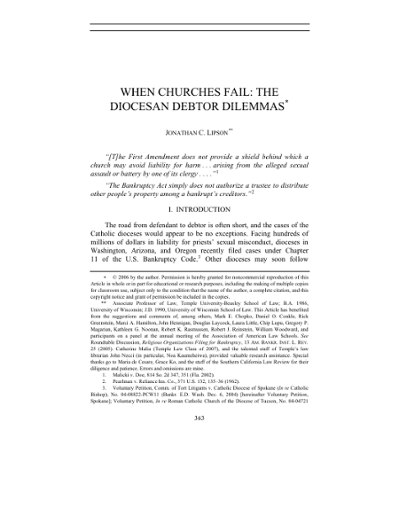 The road from defendant to debtor is often short, and the cases of the Catholic dioceses would appear to be no exceptions. Facing hundreds of millions of dollars in liability for priests’ sexual misconduct, dioceses in Washington, Arizona, and Oregon recently filed cases under Chapter 11 of the U.S. Bankruptcy Code. Other dioceses may soon follow suit. Like the Dow Corning Corporation, the A.H. Robins Company, countless asbestos manufacturers, and other tortfeasors of recent memory, the dioceses seek to discharge – to reduce or eliminate – the claims against them. As with most mass tort bankruptcies, these cases present a struggle between two sets of comparatively innocent parties: tort claimants (the victims of the sexual abuse) and other creditors, on the one hand, versus the parishioners, or church members, on the other. Unlike most bankruptcies, however, these cases present two dilemmas: one doctrinal and the other constitutional. The doctrinal dilemma will force bankruptcy courts to choose between the bankruptcy rules that would ordinarily apply in a Chapter 11 case and exceptions imposed by religious liberty principles. The choice will be difficult, for at least three reasons. First, if a diocese were effectively shut down (because all assets were sold) over the objection of the diocese and parishioners, those parishioners, and perhaps the bishop, may credibly claim that this use of the Bankruptcy Code “substantially burdens” their exercise of religion under both the Religion Clauses of the First Amendment and statutory protections for religious actors. Second, for a variety of complex reasons, the internal rules of the churches themselves (that is, canon law) may displace or modify state law rules on property and governance that would ordinarily apply in bankruptcy. Third, use of some of the more intrusive powers ordinarily available in bankruptcy cases, such as appointment of a Chapter 11 trustee, might violate the Establishment Clause by “entangling” state actors in church affairs.