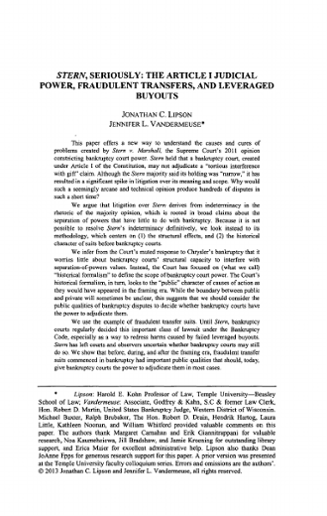 This paper offers a new way to understand the causes and cures of problems created by Stern v. Marshall, the Supreme Court’s 2011 opinion constricting bankruptcy court power. Stern held that a bankruptcy court, created under Article I of the Constitution, may not adjudicate a “tortious-interference-with-gift” claim. Although the Stern majority said its holding was “narrow,” it has resulted in a significant spike in litigation over its meaning and scope. Why would such a seemingly arcane and technical opinion produce hundreds of disputes in only two years? We argue that litigation over Stern derives from indeterminacy in the rhetoric of the majority opinion, which is rooted in broad claims about the separation of powers that have little to do with bankruptcy. We further argue that the best way to resolve Stern’s indeterminacy — and thus the amount and cost of Stern litigation — is to take its methodology, not its rhetoric, seriously. Methodologically, Stern teaches that we should assess (1) the structural effects, and (2) the historical character of suits before bankruptcy courts. We infer from the Court’s muted response to the Chrysler bankruptcy that it does not, in fact, worry that bankruptcy courts will undermine the separation of powers. This leaves only (what we call) “historical formalism” to define the scope of bankruptcy court power. We apply the methodology to fraudulent transfer attacks on failed leveraged buyouts, an important type of lawsuit which, until Stern, bankruptcy courts regularly adjudicated. Historically, such suits had important “public” purposes that should bring them within the Article I judicial power. We make this argument because we worry about other proposals to solve the Stern problem that would impute party “consent” or treat bankruptcy courts as magistrates. The Court has agreed to consider these in the 2013-14 term in In re Bellingham Insurance Agency. We argue that these technical maneuvers will only create greater litigation costs in a system ill-suited to absorb them. The Court should accept its commitment to historical formalism, and recognize that bankruptcy courts have the power to adjudicate fraudulent transfers in most cases.