A Return to Common Sense: Protecting Health, Safety, and the Environment Through Pragmatic Regulatory Impact Analysis 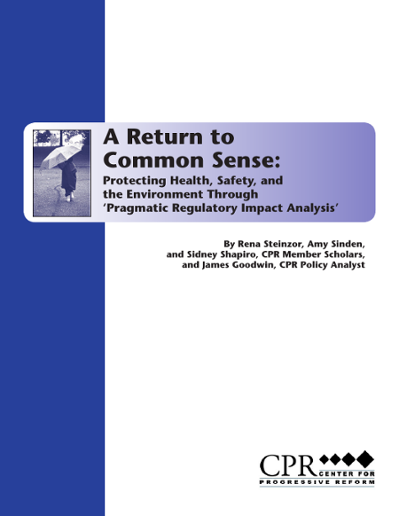 For almost all of the last 30 years, cost-benefit analysis (CBA) has been the principal yardstick by which federal regulatory agencies measured the value of regulatory protections for health, safety, and the environment. During that time, its failings have been laid bare repeatedly. It overstates the “costs” of regulation, often because it relies on inflated estimates from industry, and understates the benefits, sometimes ignoring huge benefits altogether because their dollar values are not readily fixed. It has been subject to gross political manipulation. And it has produced absurd results, leaving people and the environment vulnerable to unnecessary and unjustifiable risks. While proponents of CBA sometimes acknowledge that their method of regulatory impact analysis is flawed, they routinely assert that there is no better method. This white paper demonstrates otherwise, proposing that agencies adopt a method of regulatory decisionmaking called “pragmatic regulatory impact analysis” (PRIA). In many ways, PRIA represents a a return to the original “pragmatic” approach to regulatory decisionmaking that agencies employed before the advent of CBA. PRIA would: 1. Focus on the decisionmaking criteria that Congress established in the various the health, safety, and environmental statutes; 2. Take into account the informed input of a broad range of agency experts with relevant expertise regarding the risk to be addressed and how best to respond to it; and 3. Seek to fulfill the precautionary objectives of these statutes by enabling agencies to take regulatory actions consistent with the best judgment of fully informed agency experts and administrators. PRIA would require agencies to make their decisionmaking more explicit and transparent by adding three procedural reforms: 1. Pre-decisional development. A document labeled a “pragmatic regulatory impact analysis” (PRIA) would be developed as soon as an agency begins the process of considering a new regulation. At the outset, the PRIA would serve as the repository of the substantive issues the agency’s multi-disciplinary team believed it must inves tigate before formulating an actual rulemaking proposal. PRIAs would thus become the blueprint for the process, undergoing constant change, as the agency understood the issues better. 2. Public notification. The PRIA document would be published before a Notice of Proposed Rulemaking (NPR) is released. An NPR is a standard rulemaking document in which an agency typically announces a proposed rule, providing along with it an explanation of how it tentatively resolved each of the preliminary issues that needed to be sorted out in order to justify its proposed rule. The PRIA document would function as a discussion draft of the NPR by offering a clear and concise overview of the key issues an agency must resolve before it can issue a NPR. PRIA therefore would not only assist agency officials in formulating a NPR, it would provide the public with the background to the NPR in an accessible and understandable format. 3. Public input. In appropriate situations, agencies could invite public comment on the PRIA document. Under current practice, an agency sometimes issues an Ad vanced Notice of Proposed Rulemaking (ANPR), which proposes various policy options to the public and requests comment on them. But the PRIA document would provide a more in-depth analysis of the issues at stake and the advantages and disadvantages of different policy options. Accordingly, it would produce more informed public input and be of more assistance to the agency.