An Emerging Human Right to Security from Climate Change: The Case Against Gas Flaring in Nigeria 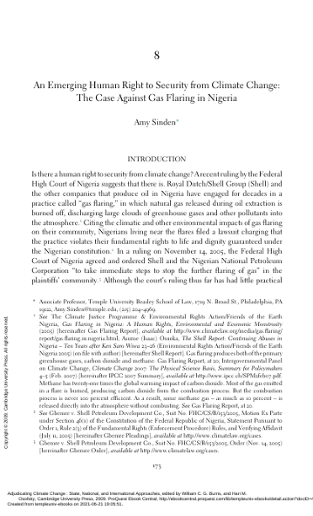 Most of the oil wells in Nigeria are accompanied by a raging flame that burns twenty-four hours a day, reaching hundreds of feet into the sky, killing the surrounding vegetation with searing heat, emitting a deafening roar, and belching a cocktail of smoke, soot, and toxic chemicals into the air along with a potent mixture of greenhouse gases. In 2005, the Federal High Court of Nigeria ruled that the widespread practice of gas flaring by Shell and other oil companies in the Niger Delta constituted a human rights violation. This may be the first court ruling anywhere in the world to suggest that there is a human right to security from climate change. Such a right is warranted. It actually fits comfortably within the principles and values that underlie some of the oldest and most venerated rights in the civil and political rights tradition. Even though that tradition was born over two hundred years ago, long before anyone could have conceived of the idea of climate change, this problem - at least in its political aspects - is exactly the kind of problem that civil and political rights are aimed at combating. It is a problem that arises fundamentally from the distortion of government decision making by power. Nor does the fact that the actions complained of here were committed by private actors take this case outside the rubric of human rights. Even under traditional doctrine, the close relationship between Shell and the Nigerian government in this case may well warrant a finding of liability against Shell for acting in concert with the State. But even in cases where no joint venture with the government can be proved, it may be appropriate to hold the multi-national corporation liable. The same concerns that animated the conceptualization of civil and political rights in the eighteenth century as rights against the State, warrant the imposition of such rights directly against multinational corporations in the twenty-first century, when such corporations wield more wealth than many countries and the power of multinationals to affect the conditions of daily existence for individuals often rivals that of government.