Shifting the Domestic and International Logjams on Climate Change: A New Defense of Cap and Dividend 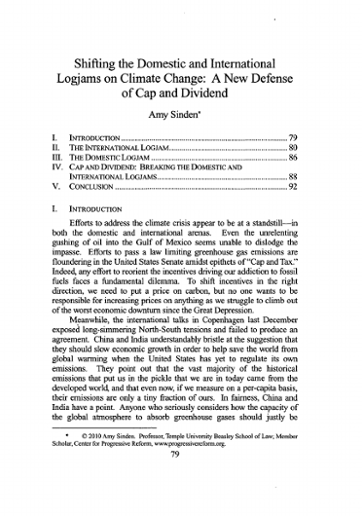 Efforts to pass a law limiting greenhouse gas emissions are floundering in the U.S. Senate amidst epithets of “Cap and Tax.” Meanwhile, international talks in Copenhagen last December exposed long simmering North-South tensions and failed to produce an agreement. China and India understandably bristle at the suggestion that they should slow economic growth in order to help save the world from global warming when the U.S. has yet to regulate its own emissions. They point out that the vast majority of the historical emissions that put us in the pickle we’re in today came from the developed world, and that even now, if we measure on a per capita basis, their emissions are only a tiny fraction of ours. In fairness, they have a point. Anyone who seriously considers how the capacity of the global atmosphere to absorb greenhouse gases should justly be distributed among the people and nations of the world, comes to the unremarkable conclusion that it should be allocated in equal shares — on a per capita basis. But any international agreement that takes that principle as its starting point will inevitably entail a massive transfer of wealth from the developed to the developing world — not something the American public is likely to eagerly embrace. So how do we design domestic climate change regulation in a way that shifts the economic incentives on corporations and individuals sufficiently to dramatically reduce their use of fossil fuels, but that does so in a way that’s politically palatable, that drafts individuals to the cause rather than alienating them, and that also begins to sensitize the American public to the international perspective on this issue? That’s a tall order, and, undoubtedly, there is no perfect solution. There is, however an idea that perhaps deserves more attention that it has received so far. A “cap and dividend” approach would auction off all allowances and return all the revenues to each U.S. resident in equal shares in the form of a rebate check. This would put the money generated by selling tradable allowances in the pockets of consumers rather than in the pockets of industry. It would still raise energy prices, which is good if we want to get people to conserve and switch to renewables, but it would allow individuals who keep their carbon footprints within reasonable limits to break even or even make money on the deal. Perhaps most importantly, however, such a program might have the capacity to engage people in new and positive ways and to entirely reorient the individual consumer’s relationship with the fight against global warming. They might begin to view a cap and trade program as a way to make money rather than another government regulation that costs them money. Moreover, to the extent that people saw the connection between their individual carbon footprint and their “fair share” allocation of allowance revenues, such a system might begin to re-frame the issue of climate change in a way that might resonate with widely held social norms of personal responsibility. And perhaps it might even begin to sensitize the American public to the developing world’s perspective on this issue, which is fundamentally grounded in a per capita measurement of greenhouse gas emissions.