Regulatory Blowout: How Regulatory Failures Made the BP Disaster Possible, and How the System Can Be Fixed to Avoid a Recurrence 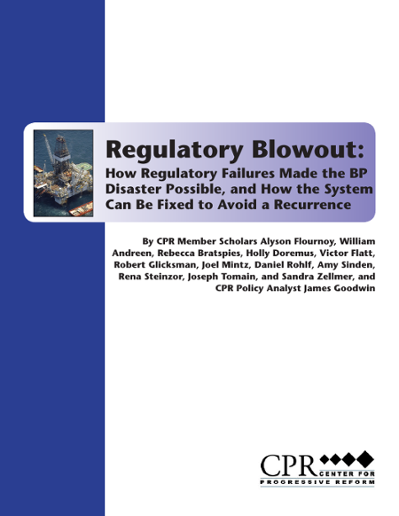 The BP oil spill in the Gulf of Mexico is destined to take its place as one of the greatest environmental disasters in the history of the United States, or for that matter, of the entire planet. Like so many other disasters on that list, it was entirely preventable. BP must shoulder its share of the blame, of course. Similarly, the Minerals Management Service (MMS) – since reorganized and rebranded – has come under much deserved criticism for its failure to rein in BP’s avaricious approach to drilling even where it was unable to respond to a worst-case scenario in a responsible and timely fashion. But the problems run much deeper than a single risk-taking company and a single dysfunctional regulatory agency. This report sketches out widespread regulatory failure, touching several agencies of the federal government and affecting several critical environmental statutes. Prepared by Member Scholars of the Center for Progressive Reform (CPR), it has two goals: (1) to identify how and why the regulatory system failed to protect the public and environment and prevent the BP disaster, and (2) to recommend the priority reforms that are essential to correct these regulatory deficiencies. The report begins by laying out the shortcomings in the primary statute under which deepwater oil drilling is regulated – the Outer Continental Shelf Lands Act (OCSLA) – and outlines key reforms needed to provide the authority necessary to protect the public interest. It then turns to systemic problems within the agency charged with regulation of deepwater oil drilling under the OCSLA – the Mineral Management Service (MMS), renamed the Bureau of Ocean Energy Management, Regulation and Enforcement (BOEMRE) in the wake of the disaster. These include problems of agency capture and inadequate funding. The third topic addressed in the report is the role of the National Environmental Policy Act (NEPA) – how and why this landmark statute was disabled from performing its critical role in the case of the BP well, and what regulatory changes can ensure that it functions effectively in the future. The report next details the problems that surrounded the implementation and enforcement of the Endangered Species Act (ESA) as it applied to oil drilling and recommends several key reforms. The report then discusses a systemic problem that is a theme in each prior section and that specific statutory reforms cannot fully remedy: obstacles to making sound regulatory decisions in the face of uncertain, low probability risks of potentially catastrophic or irreversible harm. This section highlights a common sense solution: adoption of a precautionary stance. A precautionary approach would replace the current widely-adopted presumption that regulation must await a high – and often unattainable – degree of certainty, even when the potential costs are irreversible or catastrophic. In the last sections of the report, we step back to look at the regulatory system from a broader perspective. We consider first how the regulatory system and its failures in this case were caused in part by the absence of coherent policies on energy and climate change. Our current policy provides vast incentives for risky oil and gas development like deepwater drilling and few for low-carbon alternative energy sources. In the wake of yet another painful lesson on the cost of our current incoherent approach, it is time to focus political attention on the difficult but necessary task of debating and adopting a coherent and sound energy policy. In the final section, we step back geographically to suggest why another lesson of this disaster is that the United States should undertake to learn more from the experience abroad, offering the example of the North Sea. Had we been paying closer attention, the investigations and reforms in the wake of the infamous Piper Alpha spill or the Bravo platform blowout might have offered insights to help us avoid this disaster.