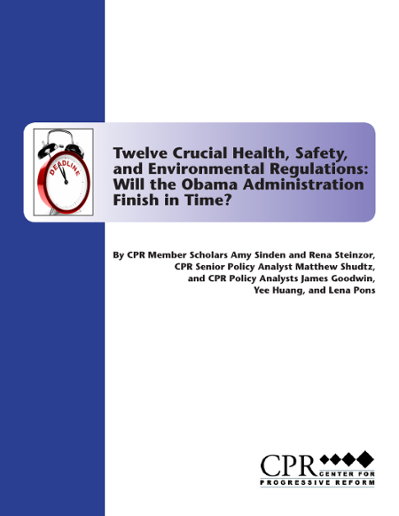 When President Obama came to the White House and put his appointees in place, they faced a long to-do list. For the preceding eight years, the dominant view within the Executive Branch had been that health, safety, and environmental regulation was a nuisance to business, cutting into industry profits in service of objectives that had never been part of President George W. Bush’s agenda. By the time Bush II left office on January 20, 2009, little had been done and a lot of important safeguards had been rolled back. Crucial rules mandated by Congress were delayed or derailed, and enforcement was a shadow of its former self. The Obama Administration came to power promising to reinvigorate protections for public health, worker and consumer safety, and the environment; and, indeed, the Administration has made important progress on several fronts. But the President’s first term in office is more than half over, and too much remains to be done. To fulfill the promises he made to the American people, prevent further catastrophes, and save American industry from its own short-sighted opportunism, the President needs to exhort his Cabinet, his political appointees, and the White House staff to get crucial things done. This report identifies 12 such regulatory safeguards, a collection that in the view of the authors represents the 12 most critical environmental, health, and safety regulations still in the pipeline. Too many of them are in serious danger of being stuck in the pipeline long after January 20, 2013. In particular, for nine of these 12 most critical rules, the Administration is currently on a trajectory that makes it possible, even likely, that it will not complete work on the regulation by the end of the President’s first term. Such an outcome would be particularly distressing because it would not be the consequence of congressional interference or other political opposition, but a flat out failure of the Administration to get its work done in a timely manner – a straightforward unforced error with potentially huge consequences. The report says that three factors will play an outsized role in whether the Administration finishes in time: delays from the Office of Information and Regulatory Affairs, needlessly protracted deliberations by the agencies themselves, and pressure from anti-regulatory interests.