Trump's New 'Regulatory Czar': Poised to Lead the Assault on Our Safeguards 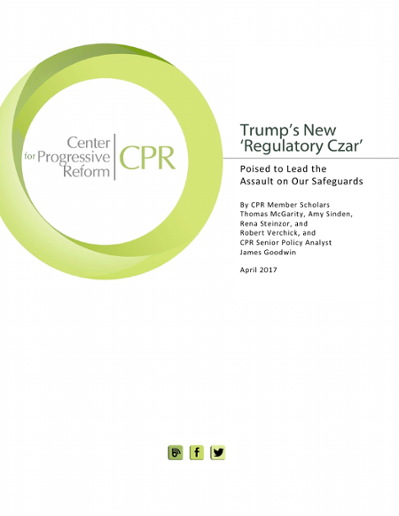 The White House Office of Information and Regulatory Affairs (OIRA) sits at a critical juncture in the path of regulatory safeguards for health, safety, and the environment. It has a long history of using the lever of cost-benefit analysis to dilute and block safeguards unpopular with industry, and in a variety of ways, politicizing the regulatory process. According to an April 2017 report from CPR, the nomination of George Mason University law professor Neomi Rao to serve as its administrator signals the Trump administration’s determination to buttress OIRA’s role as an impediment to sensible safeguards. The report by CPR Member Scholars Thomas McGarity, Amy Sinden, Rena Steinzor, and Robert Verchick, and CPR Senior Policy Analyst James Goodwin, examines Rao’s background and concludes the her modest record of “scholarship and other public statements reflect a deep distrust of federal agencies and their role as policymaking institutions within our constitutional system of government.” The authors note, Rao “has called for more constraints on regulatory agencies – including enhanced centralized presidential control over both executive branch and independent agencies – that would inhibit their ability to carry out their respective missions by instituting new public safeguards and enforcing existing ones. In addition, she has staked out an extremely narrow conception of some human rights, which could lead to a low-balling of rules intended to protect those rights.” Since the early days of the Reagan administration, OIRA has required regulatory agencies like the Environmental Protection Agency, Food and Drug Administration, Occupational Safety and Health Administration, and others to seek its approval before issuing protective rules — thus giving political appointees in the White House great influence over the rules designed to enforce landmark laws like the Clean Air Act, Clean Water Act, Occupational Safety and Health Act, and more. OIRA rides herd over agencies’ cost-benefit analyses for rules and uses that authority to block or weaken them, often after inviting industry lobbyists to weigh in, repeating objections they’ve voiced to agencies during the development of the rules. Two key factors are likely to distinguish the Trump administration’s regulatory process from his predecessors’, according to the report: “The first is Trump’s’ selection of individuals – such as EPA Administrator Scott Pruitt – who are actively hostile to the missions of the agencies they will be running. The other is Trump’s two new anti-regulatory executive orders, which together make deregulation a top policy priority for the administration and a shared commitment among Trump-appointed officials to comply with those orders.” Rao and OIRA are poised to oversee implementation of Trump’s assault on our safeguards, working to assist and direct agencies in dismantling crucial public protections, and perhaps helping them devise ways to insulate the repeal of duly enacted rules from subsequent legal challenge.