MEASUREMENT AND MODULATION OF CHARGE TRANSPORT THROUGH SMALL BENZENE DERIVATIVES 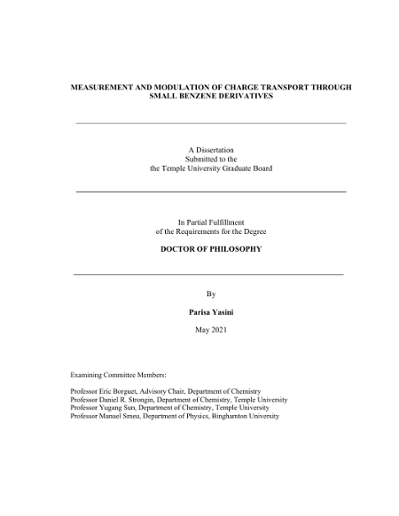 The incorporation of molecules as low-cost and stable structures in electronic circuits is a promising strategy to miniaturize electronic components. Although single-molecule electronics is still at an early phase, the investigation of charge transport through single molecules is fundamentally important to understand the relevant scientific concepts and technological applications. In this dissertation, we measured and modulated the charge transport perpendicular to the plane of small benzene derivatives. In contrast to the conventional strategy to link molecules to electrodes via anchoring groups, we used the electrode potential to control the geometry of molecules and to form the junctions through π-system-metal electrode interactions. Using a combination of electrochemical STM (EC-STM) imaging and STM-BJ methods, the measurement of charge transport through single, flat oriented tetrafluoroterephthalic acid (TFTPA) molecules on an electrified Au (111) electrode showed that, at potentials below the potential of zero-charge (pzc) of Au(111), the molecules lie flat on the electrode and form highly ordered structures. The conductance of TFTPA, along the axis perpendicular to the benzene plane, is 0.24 ± 0.04 G0, consistent with reports for other molecules oriented flat in the junction. The configuration dependent conductivity has been confirmed by first-principles non-equilibrium Green’s function computation performed by Professor John Perdew and Dr. Haowei Peng at Temple University. Hence, the electrochemical surface potential can be employed to control the orientation of molecules to access a new charge transport measurement axis. Building on our previous results (Chapter 3), we studied charge transport through two fundamentally important molecules, tetracyanoquinodimethane (TCNQ) and tetrafluorotetracyanoquinodimethane (F4TCNQ) to determine the effect of molecule-electrode binding while maintaining the same core molecular structure. The findings show that on the negatively charged Au(111), the flat-oriented TCNQ and F4TCNQ molecules exhibit similar but high conductance of ~ 0.22 ± 0.01 G0 and 0.24 ± 0.01 G0, respectively. In addition to the high conductance, two peaks at 0.02 G0, and 0.05 G0 were detected for both molecules, assigned to the bidentate-bidentate and monodentate-bidentate configurations. Density functional theory (DFT) and non-equilibrium Green’s function (NEGF) calculations were performed by Professor Manuel Smeu and Dr. Stuart Shepard at Binghamton University to determine the conductance of four distinct molecular configurations. The results show how the orientation of molecules in the junction and the molecule-electrode denticity influence the molecular orbital offsets relative to the Fermi level and the consequent charge transport. The electronic structure and charge transport through single molecules can be modulated using various functional groups. Interestingly, our previous findings (Chapters 3, and 4) showed that the conductance perpendicular to the plane of TFTPA and TCNQ/F4TCNQ was similar to the parent molecules (TPA and TCNQ). Thus, it appeared that fluorination did not significantly change charge transport properties perpendicular to the molecular plane. Building on our previous studies, we measured the conductance through mesitylene substituted with electron-withdrawing groups (e.g., NO2, Br) or with electron-donating groups (e.g., CH3) to determine if other groups might impact conductance. Our results showed that the conductance perpendicular to the molecular plane increases by introducing electron-withdrawing groups and decreases as electron-donating groups are introduced to the mesitylene molecule. Density functional theory (DFT) and non-equilibrium Green’s function (NEGF) calculations were performed to rationalize our experimental findings (By Professor Smeu and Dr. Stuart Shepard). We demonstrated that the changes in the conductance perpendicular to the molecular plane correlate well with the Hammett constant of the corresponding functional groups, indicating the importance of the nature and strength of chemical substituents on the degree of conductance modulations at least for mesitylene derivatives. Following up on the modulation of charge transport through the intrinsic properties of molecules, we investigated the effect of solvent polarity on conductance of single molecules. Particularly, we focused on charge transport through dimethylaminobenzonitrile (DMABN), a molecule that shows unique behavior, such as noticeable bulk electronic modulations in response to the physical properties of the solvents in which the molecule is immersed, e.g., dual fluorescence in polar environment, due to the stabilized intramolecular charge transfer (TICT) state. Our charge transport results show that the conductance of DMABN in a polar solvent (acidified water) is ~ten times higher than the value observed in toluene (nonpolar solvent). The conductance of a molecule with no TICT properties shows no solvent polarity-dependent conductance, indicating that the intrinsic properties of DMABN (i.e., the TICT effect) play a critical role in the enhanced conductivity in the polar solvent. Molecular dynamics calculations (performed by Professor Manuel Smeu, and Dr. Stuart Shepard) suggest that the DMABN molecule can undergo internal rotation in the junction in polar solvents, result in a higher conductance compare to the planar geometry. Our results demonstrate that molecules exhibiting TICT properties can be promising candidates to design molecular devices with sensing and switching functionalities. The findings of this dissertation, in combination with the calculations (via collaboration with computational experts), show that the intrinsic and extrinsic properties of junctions, e.g., the geometry of molecule within the junction, the charge transport axis, the molecule-electrode binding, the characteristics and electronic structure of the molecules investigated, and the physical properties of the environment, influence charge transport through single molecules. This fundamental understanding and the ability to control charge transport through single molecules may allow the design of practical devices, e.g., large-scale molecular architectures and circuits, molecular switches, and sensors.