A GENTRIFYING URBAN VILLAGE: THE ROLE OF CHURCH, MONEY, AND IDENTITY IN A PHILADELPHIA NEIGHBORHOOD 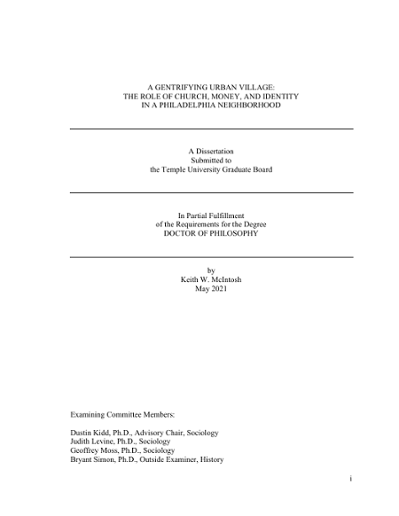 The great economic forces that built American industrial cities also quickly left them abandoned. Scholars have written extensively on the social consequences of deindustrialization. Today, however, a new period of economic growth has again changed cities. A process of redevelopment, commonly referred to as gentrification, has changed the character of former industrial cities, producing an array of new civic tensions. The new people entering cities come for job opportunities in growing economic sectors (e.g., tech, finance, and creative industries) that tend to require higher levels of education. While these sectors grow, traditional working-class jobs continue to dwindle in number and pay. This creates a polarizing force inside cities. While social polarization is often discussed as an abstract macro-level phenomenon, even abstract forces must manifest in specific places. The gentrifying neighborhood is one such place. Inside gentrifying neighborhoods, residents must contend with new people amidst profound change. My research addresses this change. It seeks to better understand what holds modern communities together (or fails to) especially as the fates of residents diverge. Gentrification provides the social context for this research, but the focus is on a specific neighborhood-level institution: the local church. I use a religious institution as the primary mode for accessing the research site for several reasons. Religious institutions are uniquely positioned to directly address issues of community, identity, and morality. That is, at church, residents engage the issues I am exploring. They discuss how to treat outsiders, how to be a good neighborhood, and how to deal collectively with community problems. Moreover, few scholars have considered the role that churches play in neighborhood gentrification, despite the prominent role of churches in communities, and despite the overall attention that gentrification has received. In order to access the perspectives of both sets of residents—the long-term residents, and the gentrifying newcomers—this research examines two churches, each populated by a different neighborhood demographic. The first church is composed of younger residents who are gentrifying the neighborhood. The second church is composed of older residents who have spent most of their lives in the neighborhood. While the two churches are divided by age, the real divide is economic. That is, the younger residents belong to an educated and prosperous class that benefit from redevelopment. The older residents, in contrast, are working-class and mostly relegated to watch as their neighborhood transforms, sometimes making them feel like outsiders. The neighborhood that constitutes the research site is Fishtown, an “urban village” in Philadelphia, long known as a white working-class enclave with a reputation for insularity. This research explores how two churches, composed of separate sets of residents, sustain community and deal with conflict in a context of increasing polarization. I use thirty-two interviews, ethnographic observation, and analysis of documents (i.e., historical land use maps and newspapers) to understand the history of Fishtown, and the role of the two churches in affecting and contending with gentrification. The research shows the enduring power of race in attenuating class divisions within the neighborhood. Gentrification is often fraught with racial tension as the gentrifying class is often whiter and wealthier than the long-term residents of a neighborhood. In Fishtown, however, this dynamic is different. The long-term residents share the same predominantly white racial identity as the newcomers. I argue that the shared identity diffuses social tensions but raises difficult questions regarding the true nature of the growing cosmopolitanism of the former urban village. Ultimately, the division within the neighborhood partitions residents into two parallel communities. This partition includes the two churches, who remain divided, even as they engage their respective residents, marshal resources for the underprivileged, and participate in a shared faith tradition. I show how the laudable activities of each church are shaped by the economic currents that rapidly change the neighborhood.