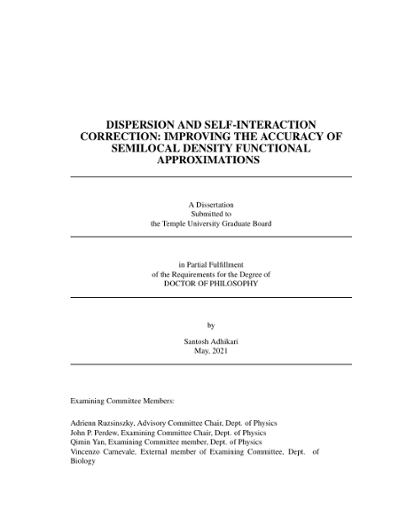 Although semilocal density functional approximations (DFA) are widely applied, none of them can capture the long-range van der Waals (vdW) attraction between the separated subsystems. However, they differ remarkably in the extent to which they capture intermediate-range vdW effects responsible for equilibrium bonds between neighboring small closed-shell subsystems. The local density approximation (LDA) often overestimates this effect, while the Perdew-Burke-Ernzerhof (PBE) generalized gradient approximation (GGA) underestimates it. The strongly-constrained and appropriately normed (SCAN) meta-GGA often estimates it well. All of these semi-local functionals require an additive correction like non-local correlation functionals (vdW-DFs, VV10, rVV10 etc.) or empirical methods ( DFT+D3, DFT+vdW, DFT+XDM etc.) to capture the long-range part. The molecular complexes bonded by vdW interactions, layered materials, and molecule-surface interactions are a few examples of the systems where the long-range effects play a crucial role.In the first part of this assessment, we investigate the adsorption of benzene and thiophene over the (111) surface of copper (Cu), gold (Au), and silver (Ag). Thiophene and benzene are the prototypes of their respective classes of aromatic compounds and are the most widely studied molecules to model such systems. We first combine a non-local correlation functional (rVV10) with the various generalized gradient approximations (GGAs), namely PBE and PBEsol, along with the meta-GGAs SCAN and revSCAN (collectively known as base functionals), through a set of parameters obtained by fitting against the argon-dimer interaction energy curve. These parameters bridge the base functionals and rVV10 and guide the delicate balance between the short- and long-range interaction. We also utilize the recently introduced vdW-dZK model based on the theory of Zaremba and Kohn. It is a proven method to yield RPA-quality results for the physisorption of graphene over different metallic surfaces. We assess the adsorption energies, vertical adsorption distances, and the molecular-orientation at various sites and compare the results to the experimental values whenever available. Based on our calculations, the semilocal functionals alone underestimate the adsorption energies, reflecting the need for additional corrections. The rVV10-based methods generally bring the molecules closer to the surface and increase the binding energies. However, there is a discrepancy in the description of rVV10 based methods when the base functional is changed. While rVV10 combined with PBE slightly underestimates the adsorption energies, revSCAN+rVV10 and PBEsol+rVV10 are significantly overestimating. The methods PBE+vdW-dZK and SCAN+vdW-dZK, in general, predict better adsorption energies. In particular, SCAN+vdW-dZK stands out in predicting adsorption distances, adsorption energies, sites, and orientation closest to the experimental values whenever available. Apart from the inability of the semilocal DFAs to capture the long-range vdW interaction, they suffer from the so-called self-interaction error (SIE), in which an electron density incorrectly interacts with itself. At the semilocal level, the self-exchange-correlation energy can not counter-balance the self-Hartree energy, giving rise to the SIE problem. About 40 years ago, Perdew and Zunger proposed a solution to it by introducing a method that could remove the spurious SIE on an orbital-by-orbital basis. However, for size-consistency of this orbital-dependent theory, localized orbitals instead of delocalized Kohn-Sham orbitals are required. Recently, Pederson \textit{et al.} introduced an elegant scheme, known as Fermi-L\"owdin orbital self-interaction correction (FLOSIC), which could generate size-extensive and localized orbitals. For an exact functional, free from SIE, the negative of the highest occupied orbital (HO) eigenvalue would equal the first ionization energy (IE). In the second part of this assessment, we evaluate the HO eigenvalue of a representative test set containing 14 small to moderate-sized organic molecules using FLOSIC. The SIE inherent in the semilocal DFAs seriously underestimates the magnitude of the HO energy. Although LDA-SIC and PBE-SIC correct them, IEs are still significantly overestimated. A similar previous work by Vydrov \textit{et al.} reported the over-correction of PZ-SIC in many-electron regions, and various schemes with moderate success have been introduced since then to scale SIC down on those regions. Recently Zope \textit{et al.} introduced a method (LSIC) based on locally scaling-down PZ-SIC using an iso-orbital indicator (z$_\sigma$) which ensures that the correction is made only in the regions where they are required. We introduce a few other approaches similar to LSIC and demonstrate that these methods significantly improve the agreement between the calculated HO eigenvalues and experimental IEs of molecules.