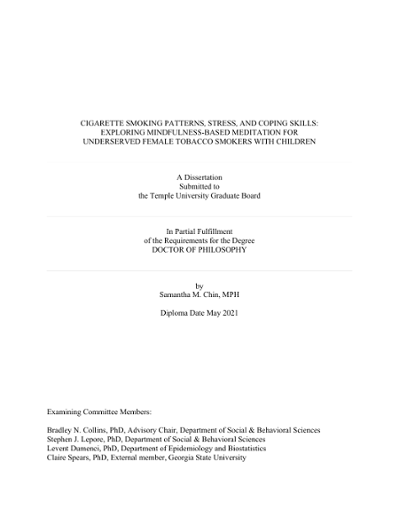 The purpose of the study was to investigate the acceptability, feasibility, potential efficacy, and putative mechanisms of a mindfulness-based intervention (MBI) to facilitate stress and smoking urge management that was tailored to low-income female smokers with children. Underserved maternal smokers have elevated levels of stress and depressive symptoms, and greater difficulty managing urges to smoke (key determinants of sustained smoking behavior) compared to the general population of smokers. An MBI that targets such determinants may be useful in facilitating smoking behavior change in this high-risk population. Purposive sampling targeted mindfulness naïve, low socioeconomic status, maternal smokers recruited from dental clinics and healthcare agencies serving low-income Philadelphia neighborhoods. The initial phase of this study used formative assessments to examine the acceptability and feasibility of mindfulness practices and guide the design of a tailored MBI. Next, the study used a randomized, two-group, repeated measures design to assess between-group effects on key factors associated with sustained smoking, comparing participants receiving MBI procedures and a control group receiving a parallel parenting skills intervention. The efficacy of MBI procedures was tested using a single 5-minute audio with MBI instructions vs a child safety recording (control) to examine group differences in negative affect and smoking urge following three massed smoking cue exposure trials at baseline. Subsequently, participants initiated four weeks of either MBI or parenting skills training delivered by daily text messages with prompts and links to group-specific audio. Participants’ smoking urge, perceived stress and daily cigarette consumption were assessed daily over the 4-week intervention via texted survey link and at end of treatment via telephone to examine efficacy in reducing stress and smoking urge and explore effects on daily cigarette smoking. The study also assessed attrition rate, adherence to daily text-based survey completion, and intervention satisfaction as indices of acceptability and feasibility. We hypothesized that the MBI would be feasible, acceptable, and, compared to the control group, demonstrate greater reductions in smoking urge and negative affect (single session assessments at baseline) as well as perceived stress and strength of smoking urge over time (4-week assessments). Between group comparisons on primary and exploratory outcomes were assessed with linear mixed models (LMM). The study also explored the facets of mindfulness and process measures. The participant sample (N = 40) was 88% African American, with an average age of 36 years old and 55% with a high school degree/GED or less. Mean baseline daily smoking consumption was around 10 cigarettes per day. Formative analyses suggested acceptability of mindfulness practice. The main theme that developed from the in-depth interviews was the need for tailored content such as shorter mediations, informal language, and text messages with pictures. Results of the single session MBI following cue exposure procedures showed no between group differences in urge or negative affect. Results of the 4-week MBI suggested that the intervention was feasible, with 4% attrition and an 87% response rate (~6 out of 7 days over 4 weeks). LMMs showed a significant time by condition effect for smoking urge, F (1, 545) = 5.38, PE = −0.038, SE = 0.016, p = 0.021, indicating that smoking urge declined significantly more over time in the MBI group compared to the control group, but no effect over time by condition for perceived stress. Thus, there was partial support for the primary hypotheses. Exploratory analyses showed a significant difference in mean cigs/day [F (1,35) = 6.993, p = 0.012] between groups (MBI mean = 5.51 cigs/day; Control mean = 8.12 cigs/day). Analysis of process measures showed the messages were well received and viewed as helpful, inspirational and motivational, providing further support of acceptability of MBI procedures. Together, results suggest acceptability and feasibility of MBI procedures in this under-studied, high risk population of smokers. Results suggest potential efficacy of 4-weeks of daily guided MBI practice at reducing smoking urges and cigarettes smoked per day among current maternal smokers, even though a single session of guided MBI among mindfulness naïve smokers may not have utility in suppressing cue-elicited smoking urge and negative affect. This study adds to the growing evidence supporting mindfulness practices to aid in smoking cessation. While the generalizability of this study is limited to a highly distressed population of maternal smokers not enrolled in smoking cessation treatment, future research could determine whether initiating this tailored MBI prior to a quit attempt could facilitate preparation of smoking cessation in a population of smokers known to have greater challenges quitting smoking.