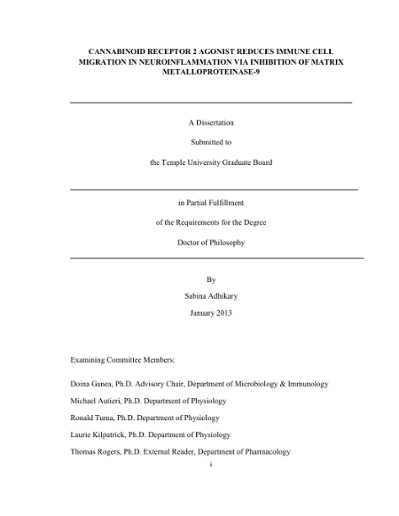 Several studies have reported that administration of cannabinoid receptor agonists in inflammatory/autoimmune and CNS injury models resulted in significant attenuation of clinical disease. The beneficial effects correlated with the observed reduction of inflammatory mediators and peripheral immune cell infiltration into the site of inflammation. Previous studies from our laboratories demonstrated that administration of cannabinoid type 2 receptor agonist attenuated disease score and improved recovery in two murine models of neuroinflammation; spinal cord injury (SCI) and experimental autoimmune encephalomyelitis (EAE), a murine model of multiple sclerosis. The goal of the current investigation was to evaluate the mechanisms through which administration of selective cannabinoid-2 receptor (CB2R) agonists modify inflammatory responses and help to improve function in SCI and EAE. In SCI, an acute neuroinflammatory disorder, administration of CB2R agonist at 1 h and 24 h following contusion injury to the cord resulted in improved recovery of motor function and bladder function (the ability to spontaneously void) compared to control animals. Evaluation of inflammatory mediators at 48h demonstrated a dramatic reduction in the expression of the chemokines CXCL9, 10, 11 and cytokines IL-23 and its receptor in CB2R agonist-treated cords. There was also a reduction in the expression of toll-like receptors (TLR1, TLR4, TLR6, and TLR7), which correlated with a decreased number of immunoreactive microglia. Interestingly, at seven days post injury, CB2R agonist-treated injured cords showed a significant reduction in both hematopoietic and myeloid cell infiltration. In EAE, a chronic neuroinflammatory disorder, our laboratories demonstrated previously that administration of a CB2R agonist led to lower disease scores and improved recovery. In this study, we observed reduced numbers of infiltrating hematopoietic and myeloid cells into the spinal cord and brain of CB2 agonist-treated mice. This reduction was observed at the peak of disease (day 17) and the effect was maintained at the chronic stage of disease (day 30). Evaluation of molecules associated with cell migration showed decreased levels of the adhesion molecule VCAM-1 and matrix metalloproteinases MMP-2 and 9 at peak of EAE in treated mice. The decrease in VCAM-1 correlates with our previous observation of decreased leukocyte rolling and adhesion to brain microvasculature. However, the reduction in MMP-2/9 expression suggests that CB2R agonists may also affect leukocyte transmigration into the perivascular space and further infiltration into the CNS parenchyma. This process requires both chemokine cues and the gelatinases MMP2/9. Animals deficient in these MMPs show leukocyte accumulation in the perivascular space and are resistant to EAE. There are no reports in the literature on possible CB2R agonist effects on gelatinases in myeloid cells. Although both MMP-2 and -9 are produced by antigen-presenting cells and act on similar substrates, MMP-9 appears to play a crucial role in EAE. Therefore, we decided to examine the effects of CB2 signaling on MMP-9 expression in myeloid cells, focusing on myeloid bone marrow-derived dendritic cells (BMDC). Activation of bone marrow-derived macrophages, dendritic cells, and primary microglia with the cytokine cocktail TNFα, IL-1ß, IL-6, containing PGE2, which mimicked an inflammatory milieu, resulted in expression of high levels of MMP-9. Treatment with CB2R agonists reduced MMP-9 in all three cell types. Since migration of DC to various sites is required for their activation and for the initiation of adaptive immune responses, we evaluated the effects of CB2R agonists on migration. The reduced levels of MMP-9 correlated with reduced migration of DC to the draining lymph nodes in vivo, as well as reduced migration vitro in the matrigel migration assay. The effect on MMP-9 expression was mediated through CB2R, resulting in reduction in cAMP levels, subsequent decrease in ERK activation, and reduced binding of c-Fos and c-Jun to the AP-1 site in the MMP-9 promoter. We postulate that, by dampening production of MMP-9 and subsequent MMP-9-dependent DC migration, cannabinoids contribute to resolve acute inflammation and to reestablish homeostasis. Selective CB2R agonists might be valuable future therapeutic agents for the treatment of chronic inflammatory conditions by targeting activated immune cells including DC.