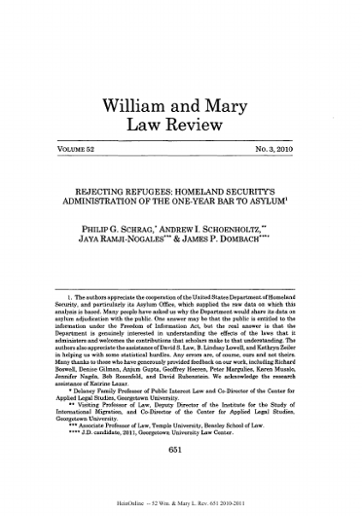 Since 1980, the Refugee Act has offered asylum to people who flee to the United States to escape persecution in their homeland. In 1996, however, Congress amended the law to bar asylum—regardless of the merits of the underlying claim—for any applicant who fails to apply within one year of entering the United States, unless the applicant qualifies for one of two exceptions to the rule. In the years since the bar was established, anecdotal reports have suggested that genuine refugees, with strong claims to asylum, have been rejected solely because of the deadline. Many scholars and practitioners suspected that this procedural bar had a dramatic effect on the U.S. asylum system. Until now, however, there has been no systematic, empirical study of the effects of the deadline on asylum seekers and the asylum system. The Department of Homeland Security (DHS), which is the first level adjudicator of affirmative applications for asylum, supplied the authors with a database of asylum claims that has never before been analyzed. This database includes demographic and other characteristics of all principal applicants for asylum before DHS since September 1998—more than 300,000 cases—and the decision reached in each case. In this Article, the authors report, for the very first time, what that database shows about DHS’s application of the one-year deadline. They find, among other things, that • over the entire time frame studied, DHS determined that nearly a third of all affirmative asylum applicants missed the filing deadline; • in the years immediately after the deadline went into effect, Fiscal Year (FY) 1998 through FY 2002, DHS found only 27 percent of applicants to be late, but after that period, DHS determined a significantly higher percentage to be late (35 percent from FY 2003 through June 8, 2009); • DHS has rejected the applications, finding no applicable exception, in the cases of 59 percent of those who were determined to have filed late, or 18 percent of all affirmative asylum applicants; • applicants from certain countries, such as the Gambia and Sierra Leone, are much more disadvantaged by the deadline than applicants from certain other countries, such as Haiti and India. The deadline may particularly impact refugees who, upon arrival, were not living among a community of emigrants from their home countries who could warn them about the deadline’s existence; • it is likely that as a result of the deadline, since April 1998 DHS has rejected more than 15,000 asylum applications, involving more than 21,000 refugees, that would otherwise have been granted. The authors conclude that because the costs of the one-year deadline exceed its benefits, it should be repealed as proposed by several bills that have been introduced in Congress.