Musica Speculativa: An Exploration of the Multimedia Concert Experience through Theory and Practice 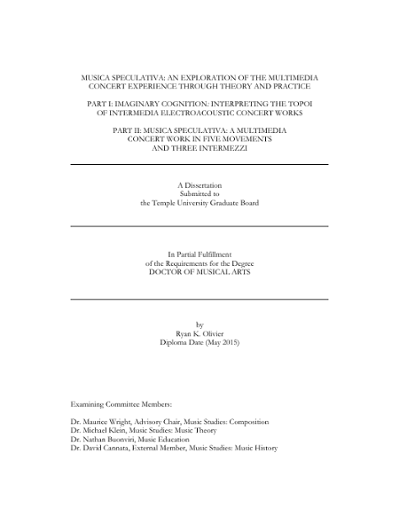 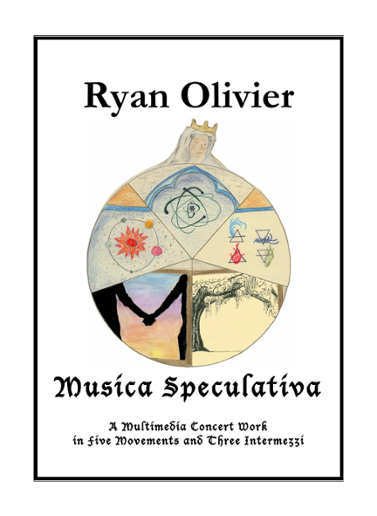 Musica Speculativa is a final project in two parts in which I explore, through both theory and practice, the role of metaphors in our understanding of reality with special attention given to the use of visual representation in multimedia concert works that employ electroacoustics. Part I, entitled, "Imaginary Cognition: Interpreting the Topoi of Intermedia Electroacoustic Concert Works," explores how metaphors play a core role in our musical experience and how aural metaphors can be enhanced by and ultimately interact with visual metaphors to create a contrapuntal intermedia experience. Part II, "Musica Speculativa: A Multimedia Concert in Five Movements and Three Intermezzi," for mezzo-soprano, flute, B-flat bass clarinet, violin, cello, piano, a percussionist performing an array of lightning bottles, a dancer with a gesture-sensing wand, and a technologist operating interactive audio and video processing, focuses on the medieval philosophy of Musica Speculativa and how it relates to our current understanding of the world. In part I explore the heightened experience of metaphorical exchange through the utilization of multimedia. The starting point is the expansion of visual enhancement in electroacoustic compositions due to the widespread availability of projection in concert halls and the multimedia expectations created through 21st-century Western culture. With the use of visual representation comes the potential to map musical ideas onto visual signs, creating another level of cognition. The subsequent unfolding of visual signifiers offers a direct visual complement and subsequent interaction to the unfolding of aural themes in electroacoustic compositions. The paper surveys the current research surrounding metaphorical thematic recognition in electroacoustic works whose transformational processes might be unfamiliar, and which in turn create fertile ground for the negotiation of meaning. The interaction of media and the differences created among the various signs within the music and the visual art create a heightened concert experience that is familiar to and in many ways expected by contemporary listeners. Composers such as Jaroslaw Kapuscinski have sought to use multimedia as a means to enhance the concert experience, giving movement to the acousmatic presence in their electroacoustic works. In turn, these works create a concert experience that is more familiar to the 21st-century audience. Through examining Kapuscinski's recent work, Oli's Dream, in light of cognitive research by Zbikowski (1998 & 2002), topic theory by Agawu (1991 & 2009), and multimedia research by Cook (1998), I propose a theory for analyzing contrapuntal meaning in multimedia concert works. The themes explored in Part I, regarding the use of metaphor to interpret both visual and aural stimuli, ultimately creating a metaphor for a reality never fully grasped due to the limits of human understanding, are further explored artistically in the multimedia concert work, Musica Speculativa. The medieval philosophy of Musica Speculativa suggests that music as it is understood today (musica instrumentalis) is the only tangible form of the metaphysical music ruling human interactions (musica humana) and ordering the cosmos (musica mundana). I found the concept of Musica Speculativa to be a fitting metaphor for how music and art allude to our own perception of reality and our place within that world. The project as a whole re-examines the concept of Musica Speculativa in light of our current technological landscape to gain a deeper understanding of how we interact with the world around us.