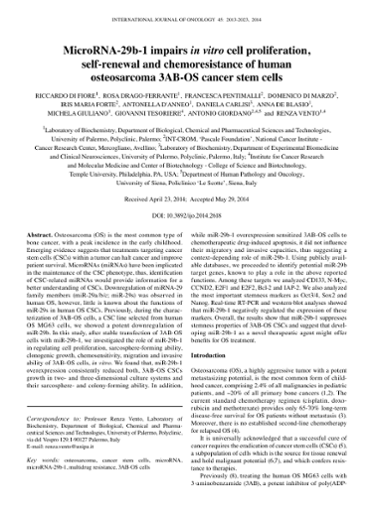 Osteosarcoma (OS) is the most common type of bone cancer, with a peak incidence in the early childhood. Emerging evidence suggests that treatments targeting cancer stem cells (CSCs) within a tumor can halt cancer and improve patient survival. MicroRNAs (miRNAs) have been implicated in the maintenance of the CSC phenotype, thus, identification of CSC-related miRNAs would provide information for a better understanding of CSCs. Downregulation of miRNA-29 family members (miR-29a/b/c; miR-29s) was observed in human OS, however, little is known about the functions of miR-29s in human OS CSCs. Previously, during the characterization of 3AB-OS cells, a CSC line selected from human OS MG63 cells, we showed a potent downregulation of miR-29b. In this study, after stable transfection of 3AB-OS cells with miR-29b-1, we investigated the role of miR-29b-1 in regulating cell proliferation, sarcosphere-forming ability, clonogenic growth, chemosensitivity, migration and invasive ability of 3AB-OS cells, in vitro. We found that, miR-29b-1 overexpression consistently reduced both, 3AB-OS CSCs growth in two- and three-dimensional culture systems and their sarcosphere- and colony-forming ability. In addition, while miR-29b-1 overexpression sensitized 3AB-OS cells to chemotherapeutic drug-induced apoptosis, it did not influence their migratory and invasive capacities, thus suggesting a context-depending role of miR-29b-1. Using publicly available databases, we proceeded to identify potential miR-29b target genes, known to play a role in the above reported functions. Among these targets we analyzed CD133, N-Myc, CCND2, E2F1 and E2F2, Bcl-2 and IAP-2. We also analyzed the most important stemness markers as Oct3/4, Sox2 and Nanog. Real-time RT-PCR and western-blot analyses showed that miR-29b-1 negatively regulated the expression of these markers. Overall, the results show that miR-29b-1 suppresses stemness properties of 3AB-OS CSCs and suggest that developing miR-29b-1 as a novel therapeutic agent might offer benefits for OS treatment.