MASS FOR A TIME OF WAR: A REQUIEM HONORING THE VICTIMS OF THE IRAQI CONFLICT 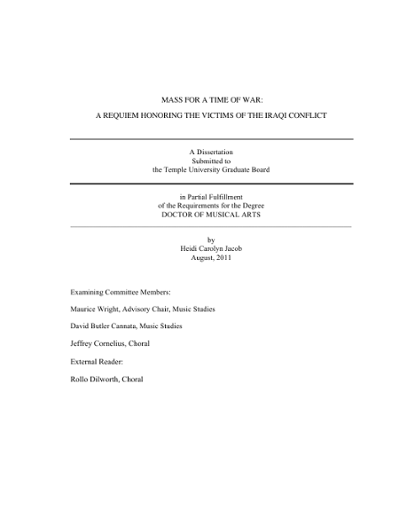 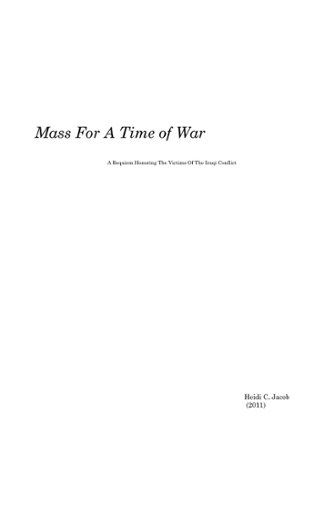 My final project for the D.M.A. in composition consists of a Requiem Mass honoring the victims of the Iraqi war, a conflict that has stirred public debate since the invasion of Iraq in 2003. It is not meant as a political statement; rather, it is intended as a tribute in the broadest sense--not only for the combatants who lost their lives, but also for the innocent citizens caught in the cross-fire, all the families left in grief, and the returning soldiers whose lives were altered if not shattered by the experience of war. It speaks to the devastating toll war has on society in general. The Requiem lasts approximately 56 minutes. Except for the Sanctus, the seven movements of the work are all performed contiguously. It is scored for mixed chorus; SSAATBB, a solo, coloratura soprano, solo tenor and orchestra (3333 2431, 2 harps, percussion and strings). Mass for a Time of War reflects a broad array of stylistic impulses from the medieval through the present day, all the while transcending the boundaries of the various musical gestures and resources. These influences include: Schoenberg's signature hexachord pair (012569) (013478), the tone row from Webern's Op. 21 Symphony (1928), Charles Ives's The Unanswered Question (1906), Stravinsky's Requiem Canticles (1966), Messiaen's Quartet for the End of Time (1941), Franz Liszt's Via Crucis (LW J33) and the Kyrie from Haydn's Mass in C major, Paukenmesse (Hob. XXII: 9). Techniques of contrafactum, serialism, including a section of total serialization as well as an aleatoric passage, are of structural importance in the work. Several new compositional methods developed for the Credo include the use of a matrix multiplier on rhythmic and tone rows to produce a new row--albeit a tonal one--and a procedure the author calls "rhythmic resonances." In Mass for a Time of War, texts and chants from the Missa pro defunctis [Mass for the Dead] are interwoven with Czeslaw Milosz's poem Meaning, and serve as structural scaffolding throughout. The choices of additional texts and what the author terms "musical subtexts" that surround the scaffolding of the Latin are selected and positioned to heighten the unfolding narrative. The texts from the Mass for the Dead anchors the Requiem, while the emotional thrust is guided by Milosz's Meaning. Although the Latin texts are deeply religious, they have been taken from their familiar context by aligning them with prose and poetry. It was not intended to remove their religious connotations, but to instead expand their significance to a metaphoric stature. Additional texts include Emily Dickinson's stark poem on death, LXXVI, several lines from Rainer Maria Rilke's The Ninth Duino Elegy, texts from Eugene O'Neill's Mourning Becomes Electra, The Red Badge of Courage by Stephen Crane, Dexter Filkin's The Forever War, texts in both the Ancient Greek and English translation of Homer's Iliad, Erich Maria Remarcque's All Quiet on the Western Front, several texts from The New York Times Magazine and New Yorker Magazine articles, as well as the names of victims on both sides of the war. The arrangement of the texts and subtexts are consciously meant to imitate "cut-up" poetry or fiction, also called découpage, a form that takes small sections of words from existing poems as well as additional texts, such as those from newspapers and magazines and rearranges them to create new poems or other texts. The dichotomy of tonal and atonal impulses, compositional constructs that informed other of my compositions, form some structural basis for the work. Choice of these and other musical procedures is not arbitrary. They are not reasons in themselves, or meant to form a new mode of expression or imitate a particular musical style. Rather they support a dramatic narrative with deep resonances and historical allusion, one that draws the listener into the emotional substance of the difficult, often brutal dilemmas of war that humankind has wrestled and struggled with since before the printed word.

Accompanied by one .doc Microsoft Word document: Mass For A Time of War (score).