The Age of Innocence: an opera in two acts 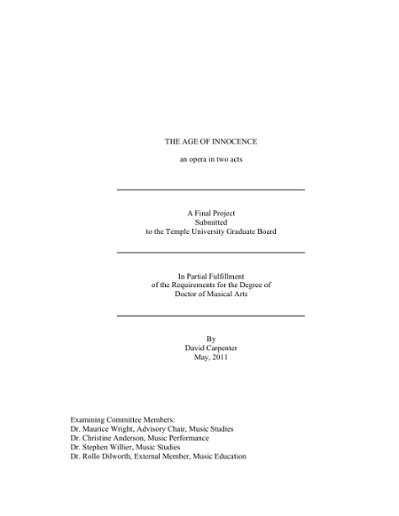 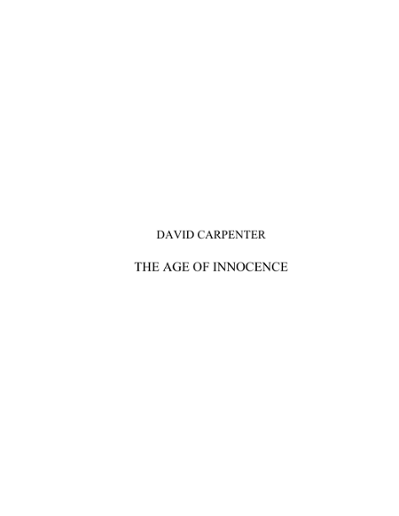 The Age of Innocence is an opera based on the 1920 novel by Edith Wharton. Set in New York high society of the 1870's, it tells the story of Newland Archer, a young lawyer, his fiancée May Welland, and her cousin, the Countess Ellen Olenska, who has returned to her native New York in an aura of scandal, having left her husband, the dissolute Polish Count Olenski, in Europe. Although Archer and Ellen fall in love, he nevertheless follows the expectations of his family and marries the lovely but conventional May. For her part, while she sees a life with Archer as an escape from her loneliness, Ellen cannot allow herself to betray her cousin, insisting that she and Archer can love each other only if they remain apart. This love triangle is unique because of the social pressures placed upon Archer: he is a product of New York society, which has taught him to believe in the factitious idea of female innocence, as personified by May. Though he questions this and other conventions of his society, he is unable to bring himself to abandon the safety of these social norms that govern every aspect of proper behavior in New York. It is Archer's love for Ellen that prompts him to challenge these standards, pointing out New York's hypocrisy in welcoming May's cousin back to America while at the same time treating her as a pariah for abandoning her husband in Europe. None of their objections to Ellen is explicitly stated, however, for this is a world which has a morbid fear of "the unpleasant"--that is, anything that would disturb the calm surface of society's politesse and social grace. It comes as no surprise, then, that Archer's desire for Ellen (especially after he marries May), becomes a potential social nightmare for his family and all of New York, as they ruthlessly plot to drive the two apart, and send Ellen back to Europe. The main challenge in creating an opera out of this story, in addition to streamlining a lengthy and complex plot, was to delineate both in the libretto and the music the realms of the said and unsaid--that is, what the characters say in public, and what they say to themselves or to others that represents their innermost feelings. In the libretto, this was achieved by drawing upon Wharton's dialogue and narration in the novel in order to create these private and public utterances, in the form of recitatives, arias, duets, or ensemble pieces. The language of the libretto has been fashioned to serve these different musical forms, with dialogue from the novel employed in moments of recitative; and freely-metered verse, with a modest use of rhyme, for the "numbers" of the opera. The music, meanwhile, employs a system of codes to define the realms of the said and unsaid--motives, sonorities and key relationships that bring into focus the interactions of the characters, especially Archer, Ellen and May as their drama plays out under the ever-watchful eyes of New York society. The music has also been rendered to bring out the stresses and meter of the text, and heighten the import of the words as sung by a particular character. I have attempted in my opera to bring to life the timeless themes of Wharton's novel: unfulfilled love, the individual versus society, the potential corrupting influence of desire, and the moral choices that human beings face as they wrestle with these common issues. Opera, through the language of music, is one of the few art forms capable of fully realizing these themes in a dramatic context--in this sense, it is just as relevant to our time as it was to Wharton's, and therefore remains a viable medium for the twenty-first-century composer.

Accompanied by one .pdf file.