﻿﻿Trait-based assembly across time and latitude in marine communities 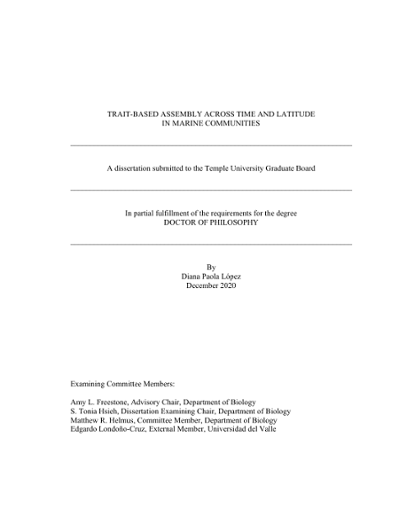 One of the central questions of ecology aims to understand the mechanisms that maintain patterns of species coexistence. Community assembly, the process of structuring communities, occurs in ecological time, is influenced by biotic interactions at local scales, and is thought to help maintain diversity patterns. Species invasions, however, as a result of globalization and intense marine trade, are common in coastal ecosystems, and have the potential to change the outcome of biotic interactions and community structure. Human-induced disturbance also disrupts community structure and coastal habitats are at greater risk due to encroachment of human populations near coasts. Changes in community structure are usually quantified as the number and distribution of species, however, the processes that shape communities act on the traits that allow and optimize species survival. Recently, ecological questions aiming to understand changes in community structure, invasion dynamics, and responses to disturbance are using measures that reflect species’ ecological functions (i.e., traits) and describe the trait composition of communities (i.e., functional structure and diversity).The objectives of my dissertation are to use functional diversity and structure to 1) determine trait responses from predation across latitude while considering interaction histories between native and introduced species with local predators, 2) use functional diversity patterns and changes in functional structure to infer the relative influence of predation and competition on community assembly through time and across latitude, and 3) assess trait responses to physical disturbance, also, through time and across latitude while considering the trait diversity of the system. To achieve these objectives, I used field experiments to grow coastal sessile marine invertebrate communities in treatments that test the influence of biotic interactions or disturbance. Experiments ran for three or twelve months at 12 sites in four regions of the Pacific Coast: Alaska, California, Mexico, and Panama. For my first objective, I found predation driven trait responses mainly occurred at lower latitudes where biotic interactions are expected to be stronger. Additionally, the native and introduced species of focal communities showed opposite trait responses to predation at lower latitudes with traits related to palatability and parental investment being primarily influenced. For my second objective, I found strong competition influenced late-stage assembly across the latitudinal gradient, while predation had a greater influence during early assembly in the tropics. Thus, the relative strength of biotic interactions changes with time and latitude and either predation or competition may serve as primary filters of community assembly. For my third objective, I found fast colonization and regeneration abilities help communities recover from intense disturbance, but only at lower latitudes where communities were most impacted by disturbance. In plant communities, functional traits have been studied quite extensively for several years and have set the stage for exploration in other ecosystems. In marine systems, the link between traits and ecological processes that influence community structure are mostly understudied, and my dissertation is contributing to close this knowledge gap about nearshore communities from across 47 degrees of latitude.