TRANSCENDENTAL IDEALISM AS A FRAMEWORK FOR AGENT-CAUSAL LIBERTARIANISM 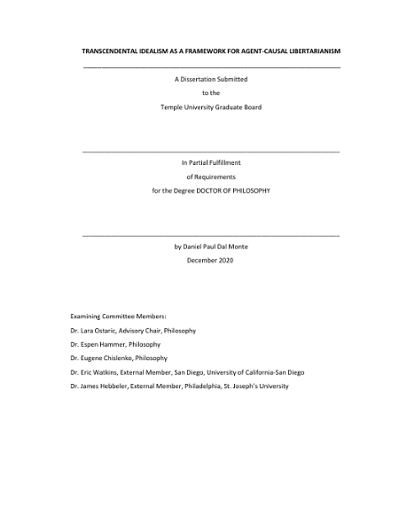 ABSTRACT In this dissertation, I occupy two realms of philosophy that have not been commonly associated. On the one hand, I enter into debates about the proper interpretation of Kant, specifically having to do with the very fractured debate on the nature and applications of transcendental idealism. I adjudicate on the matters of the relationship between appearances and things in themselves, i.e. whether it is epistemological or ontological, the way in which TI resolves the antinomial conflict of reason as it thinks the unconditioned in its exploration of cosmological questions, and the way Kant applies TI to articulate the intelligible and empirical characters in his metaphysics of agency. In addition to this historical research, I also turn to contemporary formulations of libertarian freedom. Libertarianism in free will debates is the view that free will is incompatible with determinism (i.e. incompatibilism), and free will exists. Libertarianism is a competitor to compatibilist views that claim that free will is compatible with determinism, i.e. the view that there is a unique outcome given a past and laws of nature characterizing the past. Within libertarianism, there are important differences in terms of the metaphysics of free will. Most contemporary libertarians opt for a reductionist metaphysics, in which causation consists in relationships between events and does not involve underlying grounds or substances. Both event-causal and non-causal libertarianism accordingly ground their views of freedom on the interplay of psychological events conceived of as states of affairs at instants in time. Event-causal accounts locate free will in indeterministic causal series, involve conflicting sets of motivations that resolve themselves probabilistically into a certain kind of action. Non-causal accounts do not attach free will to causality at all, instead associating it with a spontaneously occurring event. ECL and NCL struggle with establishing how the agent actually settles her action. If the action is merely the indeterministic byproduct of a set of psychological processes or process, then what ultimately occurs is not up to the agent but a product of chance. ECL and NCL nevertheless object that even an action settled by chance is done consciously and according to reasons. But these criteria are aligned with compatibilist criteria for free will. Compatibilists deny to the agent the unconditioned power to choose, which is independent of any prior determination but also not subject to chance. They point out, though, that the action is externally unconstrained, or that, if the reasons had been different, the agent would have acted differently. Since contemporary libertarianism deprives the agent of control, and creates a kind of pseudo-agent that acts ultimately according to chance, I explore other metaphysical frameworks for free will. Agent-causal libertarianism involves the agent directly causing her action as a substance. It is not some state of affairs that causes the action—a desire or belief characterizing the agent’s psychology at a certain time—but the agent herself. Agent-causation promises to resolve the problem of control associated with event-causation. The agent-caused action is neither produced deterministically from a prior event, nor is it an indeterministic fallout from probabilistic causation. Instead, it is caused by an agent-substance able to act independently of events. Timothy O’Connor is a well-known and articulate defender of agent-causation, but he also subscribes to the naturalistic framework popular in contemporary metaphysics. Even though he accepts the reality of emergent properties, the agent-cause, which has a special capacity for self-determination, is supposed to be causally united to a microphysical level where there is only passive event-causation. In this dissertation, I seek to frame agent-causation in terms of transcendental idealism. Rather than establishing the level of event-causation as metaphysically fundamental, I explore an idealistic metaphysics in which the empirical world in the spatiotemporal framework of human experience is not an absolute measure of reality. The human person is a hybrid creature, spanning two domains. On the one hand, the person exists in the empirical order in space and time. It is characterized by events subject to a causal law, by which they are accounted for in terms of prior events. On the other hand, there is a deeper level to the person, not encompassed within the limited structures of human experience. On this deep intelligible level, the human person is able to serve as the unconditioned ground of its empirical character.