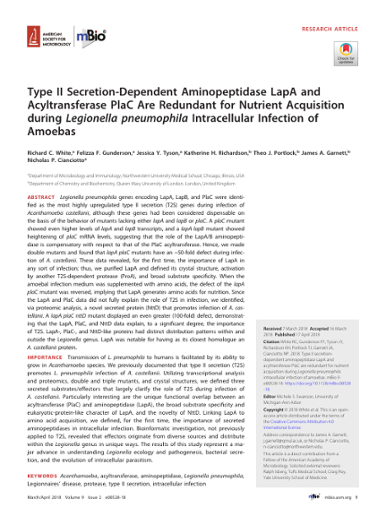 © 2018 White et al. Legionella pneumophila genes encoding LapA, LapB, and PlaC were identified as the most highly upregulated type II secretion (T2S) genes during infection of Acanthamoeba castellanii, although these genes had been considered dispensable on the basis of the behavior of mutants lacking either lapA and lapB or plaC. A plaC mutant showed even higher levels of lapA and lapB transcripts, and a lapA lapB mutant showed heightening of plaC mRNA levels, suggesting that the role of the LapA/B aminopeptidase is compensatory with respect to that of the PlaC acyltransferase. Hence, we made double mutants and found that lapA plaC mutants have an ~50-fold defect during infection of A. castellanii. These data revealed, for the first time, the importance of LapA in any sort of infection; thus, we purified LapA and defined its crystal structure, activation by another T2S-dependent protease (ProA), and broad substrate specificity. When the amoebal infection medium was supplemented with amino acids, the defect of the lapA plaC mutant was reversed, implying that LapA generates amino acids for nutrition. Since the LapA and PlaC data did not fully explain the role of T2S in infection, we identified, via proteomic analysis, a novel secreted protein (NttD) that promotes infection of A. castellanii. A lapA plaC nttD mutant displayed an even greater (100-fold) defect, demonstrating that the LapA, PlaC, and NttD data explain, to a significant degree, the importance of T2S. LapA-, PlaC-, and NttD-like proteins had distinct distribution patterns within and outside the Legionella genus. LapA was notable for having as its closest homologue an A. castellanii protein. IMPORTANCE Transmission of L. pneumophila to humans is facilitated by its ability to grow in Acanthamoeba species. We previously documented that type II secretion (T2S) promotes L. pneumophila infection of A. castellanii. Utilizing transcriptional analysis and proteomics, double and triple mutants, and crystal structures, we defined three secreted substrates/effectors that largely clarify the role of T2S during infection of A. castellanii. Particularly interesting are the unique functional overlap between an acyltransferase (PlaC) and aminopeptidase (LapA), the broad substrate specificity and eukaryotic-protein-like character of LapA, and the novelty of NttD. Linking LapA to amino acid acquisition, we defined, for the first time, the importance of secreted aminopeptidases in intracellular infection. Bioinformatic investigation, not previously applied to T2S, revealed that effectors originate from diverse sources and distribute within the Legionella genus in unique ways. The results of this study represent a major advance in understanding Legionella ecology and pathogenesis, bacterial secretion, and the evolution of intracellular parasitism.