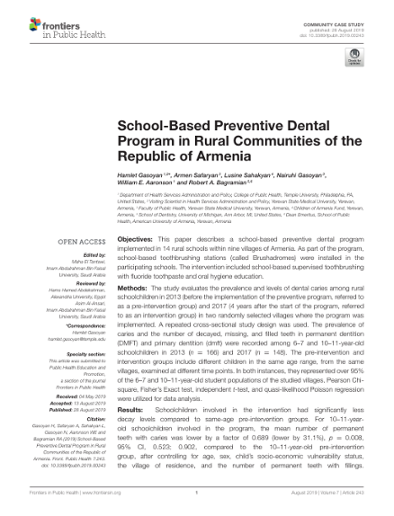 © 2019 Gasoyan, Safaryan, Sahakyan, Gasoyan, Aaronson and Bagramian. Objectives: This paper describes a school-based preventive dental program implemented in 14 rural schools within nine villages of Armenia. As part of the program, school-based toothbrushing stations (called Brushadromes) were installed in the participating schools. The intervention included school-based supervised toothbrushing with fluoride toothpaste and oral hygiene education. Methods: The study evaluates the prevalence and levels of dental caries among rural schoolchildren in 2013 (beforethe implementationof the preventiveprogram, referredto as a pre-intervention group) and 2017 (4 years after the start of the program, referred to as an intervention group) in two randomly selected villages where the program was implemented. A repeated cross-sectional study design was used. The prevalence of caries and the number of decayed, missing, and filled teeth in permanent dentition (DMFT) and primary dentition (dmft) were recorded among 6–7 and 10–11-year-old schoolchildren in 2013 (n = 166) and 2017 (n = 148). The pre-intervention and intervention groups include different children in the same age range, from the same villages,examinedatdifferenttimepoints. In both instances, theyrepresentedover95% of the 6–7 and 10–11-year-old student populations of the studied villages. Pearson Chi-square, Fisher’s Exact test, independent t-test, and quasi-likelihood Poisson regression were utilized for data analysis. Results: Schoolchildren involved in the intervention had significantly less decay levels compared to same-age pre-intervention groups. For 10–11-year-old schoolchildren involved in the program, the mean number of permanent teeth with caries was lower by a factor of 0.689 (lower by 31.1%), p = 0.008, 95% CI, 0.523; 0.902, compared to the 10–11-year-old pre-intervention group, after controlling for age, sex, child’s socio-economic vulnerability status, the village of residence, and the number of permanent teeth with fillings. Conclusions: The study indicates a significantly lower level of caries among schoolchildren in the studied two villages where the intervention was implemented. The described intervention is particularly suitable in rural settings where water fluoridation is not available and homes have limited availability of running water.

Frontiers in Cellular and Infection Microbiology