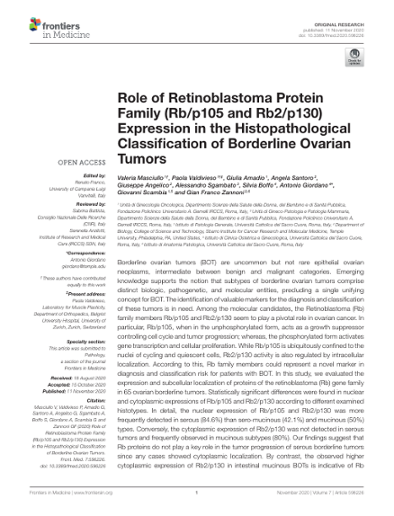 © Copyright © 2020 Masciullo, Valdivieso, Amadio, Santoro, Angelico, Sgambato, Boffo, Giordano, Scambia and Zannoni. Borderline ovarian tumors (BOT) are uncommon but not rare epithelial ovarian neoplasms, intermediate between benign and malignant categories. Emerging knowledge supports the notion that subtypes of borderline ovarian tumors comprise distinct biologic, pathogenetic, and molecular entities, precluding a single unifying concept for BOT. The identification of valuable markers for the diagnosis and classification of these tumors is in need. Among the molecular candidates, the Retinoblastoma (Rb) family members Rb/p105 and Rb2/p130 seem to play a pivotal role in ovarian cancer. In particular, Rb/p105, when in the unphosphorylated form, acts as a growth suppressor controlling cell cycle and tumor progression; whereas, the phosphorylated form activates gene transcription and cellular proliferation. While Rb/p105 is ubiquitously confined to the nuclei of cycling and quiescent cells, Rb2/p130 activity is also regulated by intracellular localization. According to this, Rb family members could represent a novel marker in diagnosis and classification risk for patients with BOT. In this study, we evaluated the expression and subcellular localization of proteins of the retinoblastoma (Rb) gene family in 65 ovarian borderline tumors. Statistically significant differences were found in nuclear and cytoplasmic expressions of Rb/p105 and Rb2/p130 according to different examined histotypes. In detail, the nuclear expression of Rb/p105 and Rb2/p130 was more frequently detected in serous (84.6%) than sero-mucinous (42.1%) and mucinous (50%) types. Conversely, the cytoplasmic expression of Rb2/p130 was not detected in serous tumors and frequently observed in mucinous subtypes (80%). Our findings suggest that Rb proteins do not play a key role in the tumor progression of serous borderline tumors since any cases showed cytoplasmic localization. By contrast, the observed higher cytoplasmic expression of Rb2/p130 in intestinal mucinous BOTs is indicative of Rb protein family involvement in the cancerogenesis pathway of mucinous ovarian tumors. Also, mucinous BOTs of intestinal-type, exhibiting low nuclear and high cytoplasmic levels of Rb2/p130 might potentially be considered a high-risk category of malignant evolution. Further studies on larger series are needed to clarify how BOTs could be stratified in different prognostic groups according to their Rb proteins immunohistochemical profile.