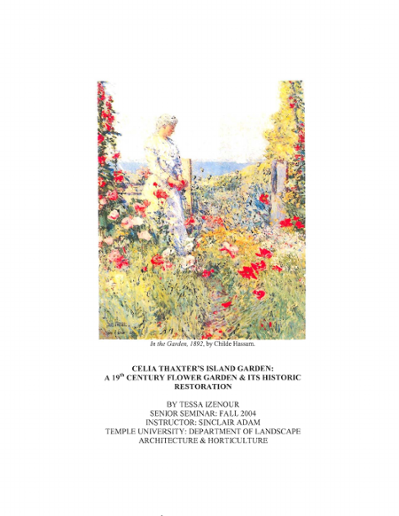 Celia Thaxter, perhaps the most renowned and popularly successful female poet of her time, was also a passionate and knowledgeable gardener, naturalist, and painter. In 1893, a year before her death, she wrote what today is still considered a garden literature classic, An Island Garden, in which she described what she called her "old-fashioned" small garden, roughly 15' x 50', on Appledore Island, Isles of Shoals, Maine. This book was beautifully, and famously, illustrated with paintings of her garden and home by the American impressionist Childe Hassam, and served as a popular literary chronicle of an famous American garden as well as an emrninently practical horticultural how-to guide. This small garden, lying roughly ten miles off the coast of Portsmouth, New Hampshire, was renowned in its day and a mecca for the pre-eminent artists, writers, and musicians of late 19th century New England, for which it was a profound inspiration. Likewise, the recreation ofher garden, begun in 1976, continues to attract increasing throngs of visitors to this day. This paper attempts to examine, deconstruct, and evaluate Celia Thaxter's original garden-- i.e., what she grew, how she grew these plants in such a harsh North Atlantic island situation, and to discuss the garden's on-going horticultural, art-historical, and cultural significance. It is the author's proposition that Celia's island garden serves as an eminent example of the dynamic dialogue between the mediums of painting and gardening, which also succinctly and emblematically, embodies the essentially ephemeral nature of gardens as works of art and their simultaneous profound potential for affecting lasting impression and significance upon culture. Celia's island garden is further analyzed in regards to issues of gender and the Victorian 'door-yard ' garden. Finally, the garden's recreation and its popular success is critically examined and discussed in relation to the amply documented and described original garden, and its effectiveness as a historical restoration effort is evaluated.

This research project was completed as part of the course, Horticulture (W395).