Voltage-dependent gating at the selectivity filter of the MthK K+ channel. 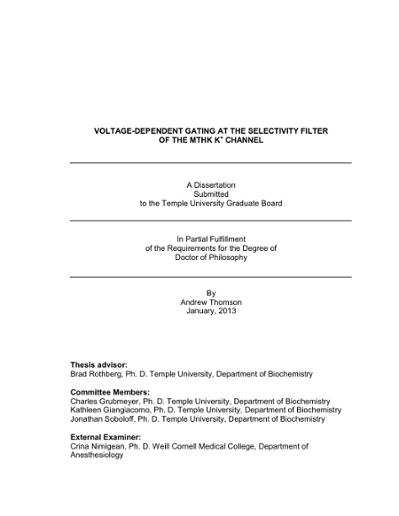 Voltage-dependent K+ channels can undergo a gating process known as C-type inactivation. This type of gating consists of entry into a nonconducting state that may involve conformational changes near the channel's selectivity filter. However, the details of the underlying mechanisms are not clear. Here, I report on a form of voltage-dependent inactivation gating observed in MthK, a prokaryotic K+ channel that lacks a canonical voltage sensor. In single-channel recordings, I observed that open probability (Po) decreases with depolarization, with a half-maximal voltage of 96 ± 3 mV. This gating is kinetically distinct from blockade by internal Ca2+ or Ba2+, suggesting that it may arise from an intrinsic inactivation mechanism. Inactivation gating was shifted toward more positive voltages by increasing external [K+] (47 mV per 10-fold increase in [K+]), suggesting that K+ binding at the extracellular side of the channel stabilizes the open-conductive state. The open-conductive state was stabilized by other external cations, and selectivity of the stabilizing site followed the sequence: K+ ≈ Rb+ &gt; Cs+ &gt; Na+ &gt; Li+ ≈ NMG+. Selectivity of the stabilizing site is somewhat weaker than that of sites that determine permeability of these ions, consistent with the idea that the site may lie toward the external end of the MthK selectivity filter. MthK gating was described over a wide range of positive voltages and external [K+] using kinetic schemes in which the open-conductive state is stabilized by K+ binding to a site that is not deep within the electric field, with the voltage-dependence of inactivation arising from both voltage-dependent K+ dissociation and transitions between nonconducting (inactivated) states. Studies of C-type inactivation in voltage-gated K+ channels have demonstrated that inactivation can be enhanced by quaternary ammonium (QA) derivatives, which block current through the channel by binding to a site at the cytoplasmic side of the pore. Enhancement of inactivation is thought to occur through a mechanism in which QA blockade leads to depletion of K+ ions in the pore, thus driving the channel toward the inactivated state. I tested this model by using divalent cations to block the current through the MthK channel, and then quantifying the effects on inactivation. I observed that the voltage-dependence of blockade by Ca2+, Mg2+, and Sr2+ was approximately equal (zδ ≈ 0.4 e0 for blockade by each of the divalent cations), suggesting a similar location for the site of blockade. However, Ca2+ and Sr2+ were found to enhance inactivation, whereas Mg2+ does not. Molecular dynamics (MD) simulations suggested that Ca2+ and Sr2+ bind to a site (S5) closer to the selectivity filter than Mg2+, consistent with the idea that binding of a divalent cation to S5 enhances inactivation; the bound cation may in turn electrostatically interact with K+ ions in the selectivity filter to break the K+ conduction cycle. Previous studies on inactivation in KcsA have identified a critical residue involved in the mechanism of C-type inactivation in this channel. This residue, E71, is located in a region known as the pore helix, and is involved in a hydrogen bonding network involving a tryptophan residue also in the pore helix, as well as an aspartic acid residue in the selectivity filter, which drives the channel toward the inactivated state. However, mutation to alanine breaks the hydrogen bonding network and effectively prevents inactivation. To determine whether a similar mechanism may enhance inactivation in MthK, I performed mutagenesis at the MthK residue analogous to KcsA E71 (V55). In single channel recordings, I observed that mutation to glutamate (V55E) destabilized the open state of the channel, consistent with the idea that a hydrogen bonding network that drives the channel toward the inactivated state may be formed in MthK to enhance inactivation, similar to the mechanism proposed for KcsA. These results, along with previous findings, suggest that inactivation gating is linked to the selectivity filter of the channel. In most K+ selective channels, the selectivity filter is composed of a sequence of highly-conserved residues (TVGYG). Within this sequence, the sidechain of the conserved threonine residue determines the entry to the selectivity filter, and may thus be a key regulator of the K+ conduction cycle. Interestingly, the rapidly inactivating voltage-gated K+ channel, HERG, contains a serine at this position instead of a threonine. To determine the impact of a change from threonine to serine, I quantified effects of the mutation T59S in MthK on conduction and inactivation, and further probed these effects using blockade by divalent cations. I observed that this mutation reduces channel conductance and enhances inactivation, compared to the wild type channel, and enhanced blockade by Sr2+. MD simulations suggested an increased energy barrier for K+ ions to enter the selectivity filter, which may account for the decreased conductance. In addition, the serine sidechain may effect a redistribution of K+ within the selectivity filter, which may impact stability of the conducting state. Overall, my results suggest that several mechanisms contribute to K+ channel inactivation, involving a combination of ion-ion interactions in the pore, structural interactions among residues in the selectivity filter that may affect the stability of the conducting state, and interactions between ions and a key sidechain at the entry to the selectivity filter. Further understanding of these components of the inactivation process may provide a clearer picture of the mechanisms that generate diversity in gating properties among K+ channels.