THE ANXIOUS ATLANTIC: WAR, MURDER, AND A “MONSTER OF A MAN” IN REVOLUTIONARY NEW ENGLAND 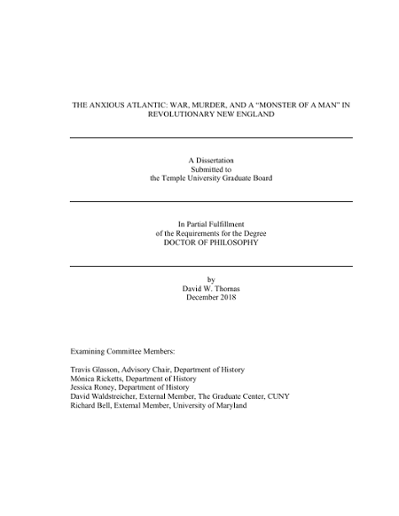 On December 11, 1782 in Wethersfield, Connecticut, a fifty-two year old English immigrant named William Beadle murdered his wife and four children and took his own life. Beadle’s erstwhile friends were aghast. William was no drunk. He was not abusive, foul-tempered, or manifestly unstable. Since arriving in 1772, Beadle had been a respected merchant in Wethersfield good society. Newspapers, pamphlets, and sermons carried the story up and down the coast. Writers quoted from a packet of letters Beadle left at the scene. Those letters disclosed Beadle’s secret allegiance to deism and the fact that the War for Independence had ruined Beadle financially, in his mind because he had acted like a patriot not a profiteer. Authors were especially unnerved with Beadle’s mysterious past. In a widely published pamphlet, Stephen Mix Mitchell, Wethersfield luminary and Beadle’s one-time closest friend, sought answers in Beadle’s youth only to admit that in ten years he had learned almost nothing about the man print dubbed a “monster.” This macabre story of family murder, and the fretful writing that carried the tale up and down the coast, is the heart of my dissertation. A microhistory, the project uses the transatlantic life, death, and print “afterlife” of William Beadle to explore alienation, anonymity, and unease in Britain’s Atlantic empire. The very characteristics that made the Atlantic world a vibrant, dynamic space—migration, commercial expansion, intellectual exchange, and revolutionary politics, to name a few—also made anxiety and failure ubiquitous in that world. Atlantic historians have described a world where white migrants crisscrossed the ocean to improve their lives, merchants created new wealth that eroded the power of landed gentry, and ideas fueled Enlightenment and engendered revolutions. The Atlantic world was indeed such a place. Aside from conquest and slavery, however, Atlantic historians have tended to elide the uglier sides of that early modern Atlantic world. William Beadle crossed the ocean three times and recreated himself in Barbados and New England, but migrations also left him rootless—unknown and perhaps unknowable. Transatlantic commerce brought exotic goods to provincial Connecticut and extended promises of social climbing, but amid imperial turmoil, the same Atlantic economy rapidly left such individuals financially bereft. Innovative ideas like deism crossed oceans in the minds of migrants, but these ideas were not always welcome. Beadle joined the cause of the American Revolution, but amid civil war, it was easy to run afoul of neighboring patriots always on the lookout for Loyalists. Beadle was far from the only person to suffer these anxieties. In the aftermath of the tragedy, commentators strained to make sense of the incident and Beadle’s writings in light of similar Atlantic fears. The story resonated precisely because it raised worries that had long bubbled beneath the surface: the anonymous neighbor from afar, the economic crash out of nowhere, modern ideas that some found exhilarating but others found distressing, and violent conflict between American and English. In his print afterlife, William Beadle became a specter of the Atlantic world. As independence was won, he haunted Americans as well, as commentators worried he was a sign that the American project was doomed to fail.