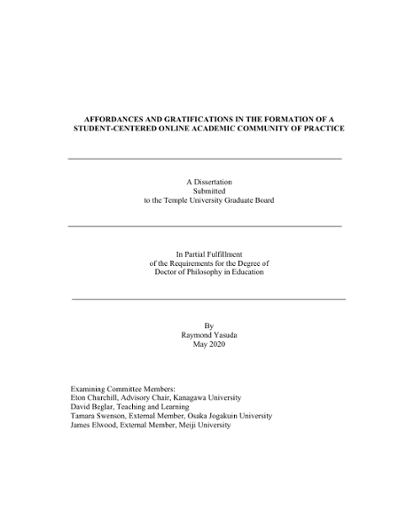 The present study is an investigation of a recent phenomenon, the creation and maintenance of a student-centered online community using Line, a Web 2.0 mobile messaging (MIM) application. In recent years, mobile instant messaging has become the most widely utilized form of social media (Clement, 2019a), and has been increasingly used by students to interact about schoolwork (e.g., Cetinkaya, 2017; Bouhnik & Deshen, 2014; Tanaka, 2014). With the ubiquity of mobile technology use amongst students, how interactions in student-centered online groups contribute to the achievement of academic goals warrants further research. Therefore, this study had three purposes. The first purpose was to utilize Wenger’s (1998) community of practice framework to investigate whether an online group formed by the students could evolve into an academic community of practice. A second purpose was to analyze online interactions through the lens of uses and gratifications theory (Katz, Blumler, & Gurevitch, 1973) to discover the specific academic uses of MIM valued by the participants. Furthermore, the affordances (Gibson, 1977) that made the application amenable to academic purposes were investigated. The third purpose was to further analyze online interactions to uncover the specific ways in which the practices of the online academic group contributed to and conflicted with the achievement of course objectives. A case study approach (Yin, 2014) was used to provide a thick descriptive account of the online group and achieve the objectives of the study. The 12 participants in this study were members of an intact EAP course, which was part of an English-medium economics curriculum at a private Japanese university. The main source of data were two online groups created using the Line application, one group consisting of all members of the class and the other a group of four students created to work on the course project. Other sources of data included online documents saved to Google Drive, a survey, interviews, and course materials. Data from all sources were coded and analyzed first inductively, using codes from the three frameworks used in the study, and then inductively, to discover any other themes that emerged from the data. The analysis suggested that the online group created by the participants evolved into an academic community of practice. There was evidence of a focused academic domain because the vast majority of online posts dealt directly with course content. Moreover, interactions revealed the development of trust, reciprocity, and commitment, all key components of mutual engagement. Various group practices also emerged that supported students in their coursework and contributed to group learning. A key factor in community formation was attributed to the Line application meeting the academic needs of students. Key gratifications associated with the needs of the students included online interaction with a closed group, convenience, quickness, retrievability, information sharing, and emotional support. The affordances that enabled these gratifications to be obtained were selective connectivity, context-free access, asynchronous/synchronous communication, information aggregation, and multi-user content creation. Further analysis of the online interactions supported by these affordances showed that the prominent group practices directly supported course objectives. However, there were several conflicts associated with the use of MIM, such as problems with the constant flow of messages, unequal levels of contribution, and academically questionable activities. Finally, a summative analysis led to the creation of a model that demonstrated the relationships between learning objectives, student academic needs, gratifications, and affordances in the formation of a community within the context of a traditional university course.