Regulation of type I interferons in murine dendritic cells 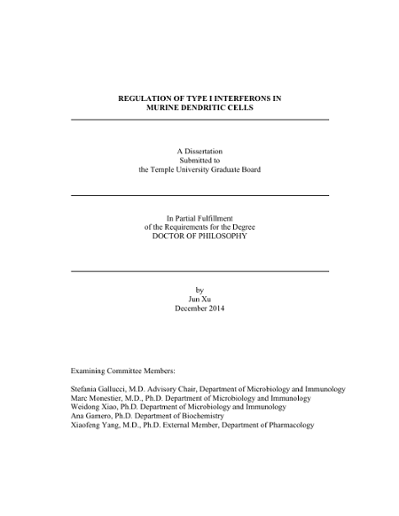 Conventional Dendritic cells (cDCs), a specialized group of immunological sentinels with tree-like or dendritic shapes, are critical for recognition of danger signals, presentation of antigens and control of a spectrum of innate and adaptive immune responses. Type I interferons (IFNs), as important danger signals, activate cDCs through the canonical type I IFN receptor signaling. Type I IFNs are the first line of host defense against viral infection by up-regulating IFN-stimulated genes (ISGs). However, there are circumstances in which the silencing of excessive type I IFNs could be beneficial to the host, such as IFN-dependent autoimmune diseases, gene therapy that uses viral vectors and transplantation. The role of type I IFNs in DC development, activation and antigen presentation function remains to be completely investigated. In this dissertation, we studied the regulation of Type I IFNs in murine DCs, both cDCs and plasmacytoid DCs (pDCs), and specifically we investigated the role of two molecules, Signal Transducer and Activator of Transcription 2 (STAT2) and Three prime Repair EXonuclease 1 (Trex1), in DC biology. Our research furthers our understanding of DC development, activation and function, and provides important data for the therapeutic application of modified DCs to induce immunological tolerance in gene therapy, IFN-dependent autoimmune diseases and transplantation. STAT2 is a nuclear transcription factor downstream of type I IFN receptor-mediated signaling, the role of which has been mostly explored in antiviral responses mediated by type I IFNs. However, the involvement of STAT2 in cDC activation and function such as cross-presentation remains hitherto unclear. We report that STAT2 is essential for murine cDC activation upon TLR3, -4, -7 and -9 stimulation. In the absence of STAT2, cDCs displayed impaired up-regulation of type I IFN response (costimulatory molecules and type I IFN-stimulated genes), and reduced inflammatory cytokine production when stimulated with TLR ligands. STAT2 was required in all of the DC responses to exogenous IFN&alpha;, suggesting that the canonical STAT1-STAT2 heterodimers are the major signaling transducers downstream of type I IFNs in DCs. Of interest, LPS-induced TNFα and IL6 production were reduced in STAT2-/- DCs but not in IFNAR1-/- DCs, suggesting a novel STAT2-dependent pathway mediated by LPS, bypassing type I IFN-receptor signaling. STAT2-deficient cDCs showed impaired cross-presentation leading to decreased CD8+ T cell response both in vitro and CTL killing in vivo, indicating that STAT2 is essential for TLR-induced cross-presentation. These results demonstrate that STAT2 is critical in the regulation of TLR-induced DC activation and cross-presentation, suggesting an essential role for STAT2 in anti-viral and anti-tumor immune responses. We also propose a novel regulatory function of STAT2 in the LPS response independent of type I IFN receptor signaling. Trex1 mutations are associated with a spectrum of type I IFN-dependent autoimmune diseases such as Aicardi-Goutières syndrome and systemic lupus erythematosus. Trex1 plays an essential role in preventing accumulation of excessive cytoplasmic DNA, avoiding cell-intrinsic innate DNA sensor activation and suppressing activation of both type I IFN-stimulated and IFN-independent antiviral genes. Trex1 also helps HIV escape cytoplasmic detection by DNA sensors. However, regulation of Trex1 in DC biology is lacking. We report that murine cDCs have high constitutive expression of Trex1 in vitro and in vivo in the spleen. In resting bone marrow-derived cDCs, type I IFNs up-regulate Trex1 expression via the canonical IFN receptor signaling pathway (STAT1-, STAT2-dependent). DC activation induced by TLR3, -4, -7 and -9 ligands also augments Trex1 expression through autocrine IFNß production and triggering of the IFN signaling pathway, while TLR4 ligand LPS also stimulates an early expression of Trex1 through an IFN-independent NFΚB-dependent signaling pathway. Furthermore, retroviral infection also induces Trex1 up-regulation in cDCs, as we found that a gene therapy HIV-1-based lentiviral vector induces significant Trex1 expression, suggesting that Trex1 may affect local and systemic administration of gene therapy vehicles. Our data indicate that Trex1 is induced in cDCs during activation upon IFN- and TLR- stimulation through the canonical IFN signaling pathway, and suggest that Trex1 may play a role in cDC activation during infection and autoimmunity. Finally, these results suggest that HIV-like viruses may up-regulate Trex1 to increase their ability to escape immunosurveillance. In order to dissect the role of Trex1 in DC functions, we compared DCs from Trex1-/- and wild-type mice. We report that Trex1 deficiency reduces absolute number of pDCs in BM but not in spleen of male over female mice. Furthermore, Trex1 deficiency preferentially represses Flt3L-induced DC development both in vitro and in vivo but not GM-CSF-dependent DC development, suggesting that Trex1 plays an indispensable role in Flt3L-induced DC development and GM-CSF may compensate the effect of Trex1 deficiency. This defect is only limited to male Trex1-/- DCs, and mimics the effect of mTOR inhibition. Furthermore, although Flt3L-induced Trex1-/- DCs expressed a type I IFN signature, they also exhibited decreased pDC development markers, indicating Trex1 regulates pDC development at the transcriptional level. Thus, we propose a novel and essential role of Trex1 in Flt3L-induced DC development, and the effect of Trex1 regulation is gender-dependent. Together, these findings enhance our understanding of regulatory roles of Type I IFNs in DC development, activation and function, supporting the beneficial role of STAT2/type I IFN axis in TLR-induced DC activation and cross-presentation. Our study in Trex1 reveals Trex1 induction by viral infection, type I IFNs and TLRs in DCs, and a new role of Trex1 in early development of Flt3L-induced DCs in a gender-dependent manner, whereby a balance between type I IFNs and Trex1 is important for DC activation and hemostasis.