From Buddy Film to Bromance: Masculinity and Male Melodrama Since 1969 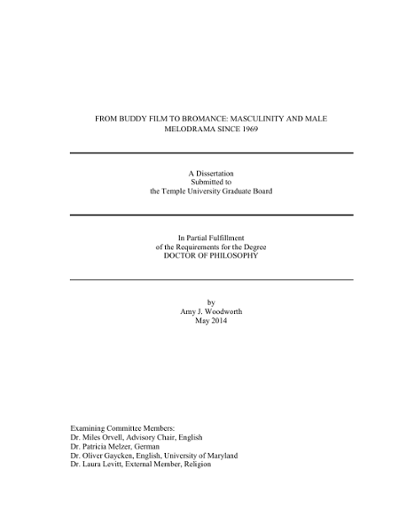 Men's tears are considered rare, and women's tears are considered profusive. Thus, we tend to think of tearjerkers and melodrama as the province of weepy women viewers. However, if we look back at the last several decades of Hollywood filmmaking, melodramas focused on men--or "male weepies"--have been a steady staple of American cinema. This dissertation explores cycles of male melodramas since 1969, placing them in their socio-historical contexts and examining the ways that they participate in public discourses about men, masculinity, and gender roles. Melodrama's focus on victims, bids for virtue, and idealizations of not how things are, but how they should be, have made it a fitting and flexible mode for responding to the changing social landscape of America since the rights movements of the 1960s. Specifically, these films consider both the ways that white capitalist patriarchy has circumscribed the public and private lives of men and the ways that advancements of women and racial minorities are impacting (white) men's lives. This study analyzes the rhetorical effects of these films through both textual evidence and popular reception. Chapters are organized by chronology and subgenre, discussing buddy films of the late 1960s and early 1970s (Midnight Cowboy, The Last Detail, and Scarecrow), paternal melodramas of the late 1970s and early 1980s (The Great Santini, Kramer vs. Kramer, and Table for Five), films of sensitive men in the early 1990s (The Prince of Tides, Regarding Henry, and Philadelphia), and black male weepies from the 1990s and 2000s (Boyz in the Hood, Antwone Fisher, John Q, and The Pursuit of Happyness). The epilogue also considers the developing genre of the bromance, a hybrid of melodrama and comedy. By classifying and analyzing these films as male melodramas, this dissertation challenges both the popular denigrating view that tearjerkers are "chick flicks," and the continued gender bifurcation within film studies' work on melodrama as a narrative mode, which tends to treat weepies as a female form of melodrama and action films as a male form of melodrama. While individual subgenres have received some critical attention, this dissertation is one of the first works to look at male weepies collectively. Putting the spotlight on male weepies reveals Hollywood's interest in gender and the emotional lives of men, though the films display a mix of progressive and conservative strains, often common in Hollywood filmmaking. Specifically, these weepies tend to question and often even reject traditional masculine ideals, and thus exhibit some forms of gender "liberation"; at the same time that they show men suffering under patriarchy and even the pressure to be powerful, these films also shore that power up for men by never forfeiting it. As such, these films reveal the dangers of Hollywood "doing" gender critique: however inadvertently, they contain feminist, anti-racist, and anti-homophobic challenges and re-inscribe the various privileges of characters (in terms of gender, race, sexuality, and often class). However, the films also dramatize the ability of people to change and to empathize with others, and often invite the viewer to do so, even across gender and racial lines. In this way, male melodramas reveal a complex response to social changes; they are marked by an interest in men changing and a more equitable society, even as fully giving up privilege seems difficult.